We attended the June 14th, 2016, (Flag Day) Village of Chatham Committee meeting.  Upon searching for an agenda/notice, which is required to be posted 48hrs in advance, we were able to confirm, no agenda/notice was posted.

I spoke briefly with the Village attorney regarding the lack of posting and he immediately confirmed that because of the lack of posting they would not be taking any action as previously planned but they would, in light of the number of citizens that showed up, allow public comment to the board.

This is one of those cases where a clear breach of the law took place by not properly posting the notice of the meeting.  They handled it with an acknowledgment of the violation with a clear willingness to do the right thing by not conducting business yet still allowing the people to share their comments with the board.   For that, we thank the board attorney and the Committee Chair for their efforts towards promoting citizen participation and recognizing the agenda posting failure.

More often than not we see these types of issues dealt with by cancelling the meeting and refusing to allow those who came to speak any time to do so, which only angers the citizens more as it was not their fault the public officials failed to do their job.

We did notice however, Mayor Gray appeared to be extremely tense and even turning red during the citizen's comments.  The majority of those speaking addressed their concerns over the Water Commission operation and the associated costs that appear to be on the rise.

We suspect some of his tension may have been tied to our recent article found here, which exposed the language in one of their Intergovernmental Agreements with the Water Commission being bogus.  That fact was confirmed by the Village attorney during this past meeting.  He agreed that the citation in the agreement was not correct.  It should be noted the current attorney was not the attorney that drafted the agreement.  Mayor Gray signed it although he clearly did not fact check what he signed.

Mayor Gray appears to have been a King-Pin in the creation of the Water Commission of which at least one board member and the attorney resigned after citizen engagement began to expose conflicts and potential malfeasance.

The Mayor has now called for a special meeting for Friday, June 17th, at noon.  We have confirmed an agenda is posted on the door.  We encourage everyone that is having issues related to the water problems come to this meeting and exercise your 1st Amendment right by expressing your concerns to your elected officials.

According to the Village policy, each citizen is provided 5 minutes to address the board.  We look forward to attending the meeting and raising issues we have discovered in the original contract forming the Water Commission. 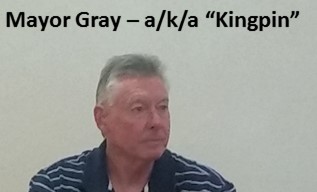