We covered this story in great detail over the last few years and are looking forward to reading Fox & DuJan's full account of everything that transpired. Repeatedly, we watched media outlets like The Chicago Tribune, The Orland Park Prairie, the Daily Southtown, the Orland Patch, and Crain's Chicago Business refuse to accurately report on bad things happening in the Orland Park Public Library. It became clear that most reporters didn't want to write a negative story about a public library or library board of trustees. So, they either willfully ignored the sex crimes happening in that library or they bent over backward trying to carry water for the OPPL by omitting anything that made the Library look bad.

That reluctance on the part of media outlets to report on law-breaking and wrongdoing going on in a public library creates an environment where unscrupulous individuals looking to take advantage of taxpayers believe they will never be held accountable for anything they do while on a public library board...since reporters are unwilling to ever expose their law-breaking. Who wants to write a story where a public library is the villain? Reporters avoided the truth like the plague when it came to the Orland Park Public Library. This makes us wonder how many library board members in our state have been getting away with things for years that school board members or village board members would never be able to get away with, since reporters are not reluctant to ever report on school boards or village boards the way they seem to deliberately not report on wrongdoing by library boards.

Fox & DuJan were threatened, harassed, bullied, intimidated, censored, and had the Library and Village abuse police resources as weapons against them. On top of that, Library Trustee Diane Jennings encouraged former OPPL spokesman Bridget Bittman to file a SLAPP lawsuit against them in federal court to shut them up and scare them away. Fox & DuJan prevailed in that lawsuit against Bittman, who claims on social media that she destroyed herself financially and is now in deep debt as a result of her filing that SLAPP. In addition to Jennings, American Library Association members encouraged and promoted Bittman's SLAPP lawsuit and egged Bittman on. Her results in federal court are also a major loss for the ALA's credibility, as all library employees should think twice about listening to the ALA when it comes to being able to censor and silence critics like Bittman tried to do.

SHUT UP! appears to be a book with everything: unreported crimes happening in public libraries, trustees caught stealing gold and shamelessly breaking the law, violations of the Illinois Open Meetings Act and FOIA statute, police harassment, public employees abusing taxpayer resources to silence and censor the public, and the profound hypocrisy of a public library board claiming that it supports the First Amendment...while ironically using every weapon it could think of (including the police!) to chill free speech and shut up its critics.

The Edgar County Watchdogs make appearances in the book, as we personally traveled to Orland Park on a few occasions and witnessed first hand the abuses of the Orland Park Public Library and its Board of Trustees (the OPPL-BoT). We confronted this out of control board and in one memorable exchange Diane Jennings shouted foul expletives at us. The OPPL-BoT ended up being one of the worst-behaved and most vicious boards of trustees we ever encountered. No one could have ever dreamed that a public library board -- of all things -- could do the things that it did to these people. It was incredible.

We are watching closely to see if the Orland Park Public Library, and other libraries in our state, censor this new book by Fox & DuJan by refusing to carry it on their shelves. Every year in the fall, the American Library Association promotes a "Banned Books Week" where the ALA claims that certain books are "banned" and "censored" because libraries choose not to carry them. By this logic, any public library that chooses not to carry Fox & DuJan's SHUT UP! The Bizarre War that One Public Library Waged Against the First Amendment is thus guilty of censoring and banning this important book (which appears to be the very first book ever written exposing unreported crimes and acts of censorship in public libraries that chill free speech and stomp out criticism using police and SLAPPs as weapons against critics).

We will be watching to find out, as the book is published later this month. Expect our review in coming weeks. 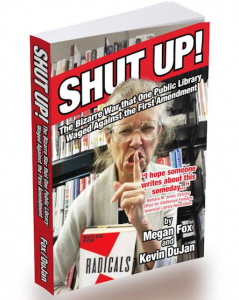