Just days after Federal Grand Jury subpoenas were issued at Lincoln-Way District 210 we find yet another Board member has resigned.

It was reported to us just moments ago that Kathleen Casey has resigned from the board.  She now makes the 4th board member to resign from D210 since our reporting began on the malfeasance taking place at that institution.

A Federal Grand Jury Subpoena issued May 4th, 2016 has rattled the cages of many to include many locals who initially attempted to defend the actions of Board Members and past administrators in spite of the pile of evidence of wrong-doing.  Now, it appears those parents who stood up and exposed so much were not the problem as so many attempted to claim. They were the heroes who stood up to their elected officials and demanded answers!  My hats off to them all!

Casey has only been on the board a few months as she replaced Chris McFadden, the Asst. US Attorney who resigned under what we suspect was the identification of the train wreck fixing to hit D210, of which his office would probably be throwing the coals to.

We will update in the event we obtain a resignation letter. 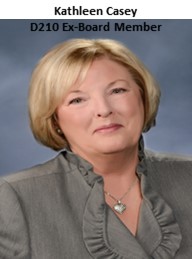