A Freedom of Information Act (FOIA) lawsuit was filed today in the 5th Judicial Circuit Court, Edgar County, against the Office of the Auditor General.  Also named in the suit is Frank Mautino, the current Auditor General.

According to the complaint, Mautino failed to comply with certain requirements of the FOI Act to include production or certain records in his possession.  The complaint was filed by Kirk Allen, pro se.  Allen is the Co-Founder of the Edgar County Watchdogs.  Allen prevailed in his pro se FOIA case against past Health and Family Services Director Julie Hamos who was ordered to turn over certain records and pay Allen’s cost.  To date, HFS has failed to comply with the court order to pay Allen’s costs in that case.

It appears Mautino is facing scrutiny from every direction and rightfully so.  As the States Auditor General, integrity and trust are crucial and indicators are pointing to a total loss of trust and integrity. Mautino has refused to answer questions from State Legislatures regarding his campaign spending habits that we exposed in this article.

We are placing our bets that Mautino never answers questions pertaining to his campaign expenditures.  It’s pretty clear his campaign records are filled with problems, and answering questions under oath could be problematic if those expenditures are determined to be criminal.  Staying silent may be his best option.

As we understand the election law, the State Board of Elections may do the following:

In addition to or in lieu of the imposition of a civil penalty, the board may report such violation and the failure or refusal to comply with the order of the Board to the Attorney General (Lisa Madigan) and the Appropriate State’s Attorney.

Short of a criminal investigation and possible prosecution, which is unlikely to happen in this State, he will probably never face accountability.  Pretty ironic for a person who is responsible for ensuring State employees are held accountable for wrongdoing.  Of the several legislators we have spoken with, all agreed, it’s time for him to resign as he has brought embarrassment and distrust to the Office of Auditor General.

A copy of the FOIA lawsuit can be viewed and/or downloaded below. 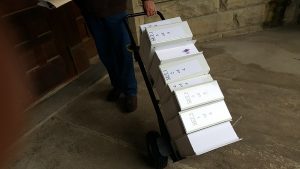