During its May 2, 2016, Special Meeting, among others, was the item reflecting what was essentially a “plea bargain”, or an “agreed judgment” that passed on a 4 – 3 vote, with the three Breuder-board-throw-backs voting no.

What she fails to realize is that polling the board members to decide to do nothing is an action in and of itself – and a vote to do nothing – in closed session.

Maybe she should listen to the audio because from the complaint filed, it is clear the “polling” was taken as a vote to allow former Chairman Birt to inform former President Breuder that his contract was extended.

The complaint (here) was not about the possibility of any action for open session, it was about the violation of the Open Meetings Act by taking action in closed session. She was confused on that issue as well.

Additionally, after all of her obsessing about attorney fees the past several months, she actually wanted to spend more on attorney fees to defend the indefensible actions of the board taking action in closed session. What a hypocrite…

This is the complaint filed by the DuPage County State’s Attorney regarding the alleged violation of the Open Meetings Act on March 6, 2014 where the then-legal firm had a “show of hands”, which constituted a vote, to authorize former Chairman Erin Birt to inform former COD President Robert Breuder of his contract extension.

The Consent Judgment admits the Board of Trustees violated the Open Meetings Act by taking a vote (action) in closed session.

The Edgar County Watchdogs’ Kirk Allen first noticed this alleged vote while reviewing a court filing of Breuder’s in relation to his civil suit, in which he mentioned this action, but there were never any public meetings or minutes reflecting such action. He then filed a complaint with the DuPage County State’s Attorney alleging this violation, and the State’s Attorney eventually reviewed the meeting audio, and filed a complaint with the court. 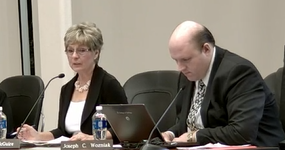