Roxana Agler, Forest Ridge Elementary D-142 school board member (and until recently its Vice President...and before that its President), has used the Oak Forest Police to target her perceived enemies (police report(s) below). A review of the police complaints she's made against fellow board members concerns parents with children in the district. An elected official who appears to view the police as a tool or weapon to be used against perceived enemies should concern everyone. 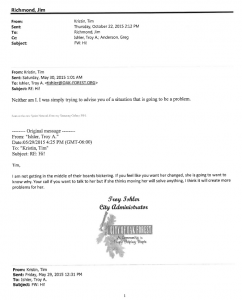 Documents produced pursuant to FOIA requests show that Agler caused public resources and time to be spent addressing her complaints and bickering with fellow board members. Deputy Police Chief Timothy Kristin and Village Administrator Troy Ishler exchanged emails at one point trying to figure out what to do about Agler. Ishler made it clear that he would not be "getting in the middle of their boards (sic) bickering." Ishler and Kristin then discussed the matter of reassigning a crossing guard that Agler was demanding to have moved. Ishler stated that moving the crossing guard would ultimately only cause more problems for the crossing guard. This is the same crossing guard that Agler had been targeting for over five months at that point. The Deputy Police Chief stressed that this was "a situation that is going to be a problem."

On 10/22/15, records show that Agler formally complained to Oak Forest Police, claiming that her perceived enemies were "stalking" her. Agler invoked the popular refrain of "bullying," which in recent years has been a word overused in our culture and misapplied to any situation where one person does not like another person and wants to accuse that person of something nebulous without having to define exactly what that other person supposedly did wrong.

Agler ran for elected office and chose to enter into politics by becoming part of the school board (and taking over its presidency at one point) yet appears to accuse anyone who opposes her of "bullying." We are waiting for society's pendulum to swing back in the opposite direction at some point in coming years and for the use of the word "bullying" to stop being abused when it is convenient for people like Agler to do so.

D-142 parents who attend school board meetings, however, have spoken out against attacks that Agler has made on other board members, including her alleged use of profanity and vulgarity during board meetings in January, February, and March 2016. Those attacks by Agler were at its last meeting about Agler's perceived continued bad behavior and disrespect for the public and her fellow board members. Agler was removed as the D-142 Vice President at that same meeting, seemingly due to her bad behavior.

Agler accuses her perceived enemies of "stalking" her and always knowing her whereabouts or her private conversations. No evidence supporting these claims ever seems to be produced by Agler. 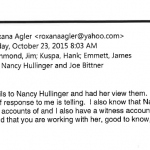 Additionally, on 10/23/15 Agler went after Oak Forest Executive Secretary Jim Richmond for "breach of confidentiality" and "breach of civil rights." Agler seems upset that the emails she sent to the Village targeting her perceived enemies were later read by them. Agler appears not to understand that all correspondence with public officials such as Richmond are public documents subject to FOIA production and that anyone can read them, per the Freedom of Information Act.

We have reached out to Ms. Agler and requested an interview to discuss this and other issues. 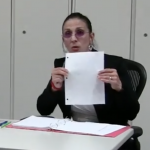