Jeremy James Baston, age 27, of Westfield, IL passed away on Tuesday afternoon, March 15, 2016 in Vermilion County, IL the result of an automobile accident. He was born January 20, 1989 in Mattoon, IL, the son of LeRoy Jr. Baston and Laura Ann Stoutin Baston. On September 10, 2011 he married Megan Elizabeth Russell in Martinsville, IL.

Jeremy was a 2007 graduate of Casey Westfield High School. He enlisted in the Illinois National Guard on April 17, 2007; he joined the 631st Engineer Support Company in Lawrenceville, IL. He later transferred to and deployed with the 661 ENG Co. as a Heavy Equipment Operator to Afghanistan from September 2011 to September 2012. As of March 2015 SGT Jeremy Baston was serving with the 2118 Asphalt Team which is a part of the 404th Maneuver Enhancement Brigade of the Illinois Army National Guard where he was a Team Leader. Jeremy was a member of the Casey VFW. He was the owner and operator of Jeremy’s Contracting in Westfield, IL specializing in home construction and concrete. He enjoyed hunting, fishing and especially cherished spending time with his children. Jeremy loved being a dad!

Funeral services will be conducted at 12 p.m. (noon) on Saturday, March 19, 2016 at the Markwell Funeral Home with Jason Towles officiating. Burial will follow in the Casey Cumberland Cemetery, Casey, IL with graveside military rites by the Illinois Army National Guard, the Casey VFW, the Hazel Dell American Legion and the Martinsville American Legion. Visitation will be held from 9 a.m. to 12 p.m. (noon) on Saturday at the Markwell Funeral Home, 200 N. Central Ave., Casey, IL.

Memorial donations may be made to the family for his children’s education fund c/o Markwell Funeral Home, PO Box 175, Casey, IL 62420. 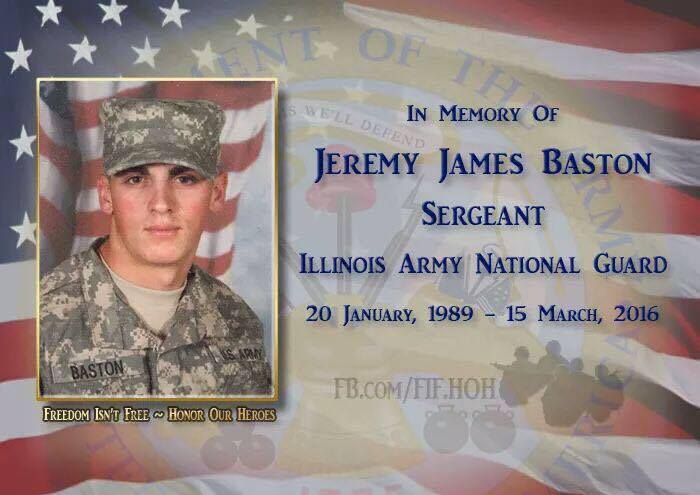