College of DuPage – McGuire the liar

In the most amazing letter to the editor I have ever seen we once again must call out rouge College of DuPage Trustee Diane McGuire for her out right fabrications, misrepresentations, and fake outrage.

She claims her issues are about trust and makes statements of fact with absolutely no evidence to support her claims other than her own opinion. .

"We need to work together to find law firms, a lobbyist, and a search firm we can all trust."

I have said it before and I will say it again, this woman will never stop with her lies and drama until she is in charge.  I contend that the reason these three rouge trustees are doing what they are doing is because they have a LOT at stake in the outcome of all these criminal investigations as they not only were a party to many of those illegal events, they allowed them to happen! 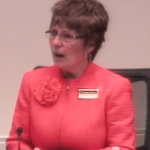