In an update to the Complaint for Administrative Review I filed last week in the Edgar County Circuit Court, one requirement to service of summons was that it be accomplished within the 35 day statutory time-limit.

I complied with the Illinois Administrative Review Law by mailing a copy of the Complaint, along with the Summons, in a sealed envelope, with postage prepaid, address to the parties at their last known address.

Whether they signed for it or not, it is deemed “served” when I deposited those envelopes with the Post Office and they were postmarked proving when they were mailed.

So, Karl Farnham Jr. and Alan Zuber refused delivery of the summons, but the law still considers thay were served since it was mailed and postmarked within the 35 day time frame. They didn’t want to follow the law, now they don’t want to go to court… 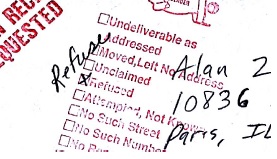