Hymera, IN. - (ECWd) -
We typically don't cross-post stories from other news outlets, but this one falls in line with attending public meetings...
From WTHI-TV (Terre Haute) -
HYMERA, Ind. (WTHI) – Indiana State Police confirmed early Wednesday that no arrests were made following a scuffle at a Hymera Town Board meeting.
Indiana State Police Tuesday night were called to the small town, about 90 miles southwest of Indianapolis, following a fight that erupted when the town’s board passed a motion to give the marshal position to Daryl McCullough.
McCullough was set to replace Darrick Cullison, the town’s former marshal, who stated he was wrongly fired. According to News 10 records, Cullison has taken legal action against the board.
In exclusive video captured by News 10, two men are seen lunging at McCullough. The video shows one man striking McCullough in the face several times. Another man, holding McCullough by the face.
Following Tuesday night’s incident, News 10’s Sara...continue reading on WTHI (here). 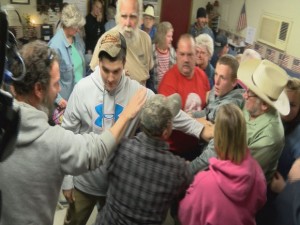