Paris, IL. (ECWd) –
The reporting on Randy Peterson’s candidacy by the News-Gazette, which reported Peterson’s ’03 DUI arrest as having “a preliminary blood test said he had a blood alcohol content of 0.156, as detected by a portable breath alcohol test device”  while it may be factually true, the complete truth of the DUI conviction was that Peterson’s BAC was actually 0.162, or more than twice the legal limit.
This is an important distinction, in that some people may have thought it was just a little over the limit and should be dismissed as not important, however, with more than twice the legal limit – it shows just how irresponsible he was to think he could get hammered and drive home while risking the lives of everyone else on the road. Other observations of the arresting officer were: “Driving completely in wrong lane of travel, red-watery eyes, strong odor of alcohol, mumbled speech, failed all field sobriety tests…”
So, if Peterson has “learned from his mistakes” and it is “all in his past” maybe he should insist on accurate reporting.
I sent the News-Gazette reporter a copy of the actual ticket and BAC printout the day after the article was posted, but it doesn’t appear he made any attempt at correcting his story. 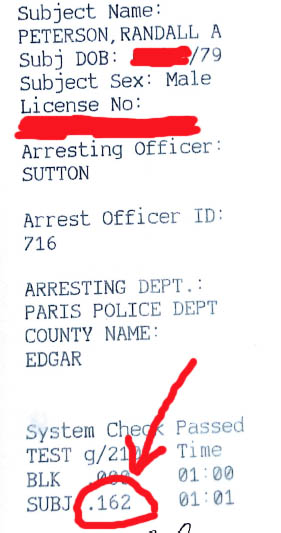