Orland Park, IL. (ECWd) –
The Illinois Attorney General’s Office has launched an inquiry into more law-breaking by the problem-child Orland Park Public Library Board of Trustees. This time, the Public Access Counselor “PAC” is investigating an allegation that they had closed and locked the doors to an open public meeting and kept members of the public out of the room once the meeting began at 7pm on 8/17/15.
Section 2.01 of the Open Meetings Act clearly states that open public meetings must be held at a time and place convenient and open to the public. This means that the public must not be barred or blocked from attending the meeting in any way.
Locked doors create an obvious barrier to the public and transform an open public meeting into a closed meeting, by very definition. Closed and locked doors = a closed meeting.
As usual with the OPPL, when caught law-breaking, invent elaborate and bizarre excuses for why the doors were locked. This time, Library Director Mary Weimar has come out with the cockamamie explanation that the doors were locked to keep out a group of lonely people who were part of a singles dating club that was scheduled to meet on 8/24/15 at the library. Weimar claims she had to lock the meeting room doors on 8/17/15 because she maintains that if she didn’t then maybe people who were a week early for this frisky singles dating club would have somehow wandered into the board meeting.
So, she admits she locked the doors and the purpose of locking the doors was to keep certain people out of the meeting. That admission should make it very easy for the Attorney General’s Office of the Public Access Counselor to make a determination in this matter. No excuse or explanation should be heard for locking the doors to an open meeting and keeping people out of the meeting.
This latest violation of the OMA by the OPPL must be seen in context with the long string of Open Meetings Act violations committed by this Board in the last two years. Each time the Board violates the OMA, this Board claims it does not have to listen to the PAC until the PAC writes a binding opinion about the Board’s behavior. This is akin to a private citizen claiming he or she can break the law up until the day he or she is indicted by a federal grand jury. This is not how things work.
Our hope is that the Attorney General’s office will take the proactive step of writing a binding opinion about the OPPL this time, though binding opinions are very rare. It’s a complicated process for the PAC to write a binding opinion and only a small handful are written every year. Most violations of the OMA are handled with an advisory opinion called a “letter of determination” from the PAC, which is a very-well researched and argued legal opinion crafted by the Public Access Bureau in response to a public body violating the Open Meetings Act in some way; all public bodies in the state of Illinois except for the Orland Park Public Library Board of Trustees are horrified, embarrassed, and strongly cautioned when receiving a letter of determination informing them that they have violated the Open Meetings Act.
The recalcitrant OPPL Board of Trustees has a weird interpretation of the law, however. This Board claims that it can ignore letters of determination as mere suggestions from the Attorney General that maybe they should behave better…but that they don’t have to really listen if they don’t want to. On several occasions, Board President Nancy Wendt Healy has made public statements to the effect that the Board’s lawyers at Klein Thorpe Jenkins have told them that letters of determination are “non-binding” and don’t have to be listened to. This is wrong.
Here is a great explanation of this issue from representatives of the Citizen Advocacy Center, who came to Orland Park last year specifically to set this Board straight about its misunderstanding of the OMA and its weird belief that it did not have to listen to a letter of determination. See: https://www.youtube.com/watch?v=gLT8RfqG2zo&list=PLILXCDHJg4yL-AlrgRxCYIIFANM-uSzIz&index=39
The Open Meetings Act clearly states that any violation of the Open Meetings Act by a public body is a Class-C misdemeanor and that all members of the public body commit a crime by violating the Open Meetings Act, each time they violate the OMA. See:

A reminder of some of the most memorable Open Meetings Act violations committed by the Orland Park Public Library Board of Trustees in recent years, to show that their behavior involves a pattern of repeat offenses that the PAC should finally address with a binding opinion (since that is what they keep asking for):

1. 10/21/13 = board attorney James Fessler from Klein Thorpe Jenkins ran the public comment portion of the OPPL meeting instead of Board President Nancy Wendt Healy; Fessler demanded that people wishing to speak state their addresses before being allowed to speak, he interrupted people while they were speaking, he argued with and attempted to correct people as they were speaking, he prohibited the public from speaking about certain topics in public comment, he told the public they have no right to demand answers of the board. The irony here is that Klein Thorpe Jenkins sends this man, James Fessler, out to conduct training seminars on the OMA for library trustees around our state, when he is forever caught on video violating the OMA in all these ways at the 10/21/13 OPPL meeting. See: https://www.youtube.com/watch?v=ouz2yJVLC_Q&list=PLILXCDHJg4yL-AlrgRxCYIIFANM-uSzIz&index=110

3. 12/16/13 = member of the public was not allowed to speak because she arrived late and did not have a chance to sign the sign-up sheet. She was told “tough” and board member Denis Ryan stated that “I guess you won’t be speaking then”. The OMA does not require people wishing to speak to sign a sheet before the meeting starts to be able to speak.

4. 1/20/14 = Board President Nancy Wendt Healy censored the public and would not allow people to speak about certain topics. She would not allow criticism of the library board and claimed that Klein Thorpe Jenkins told her that she could censor the topics allowed for public comment. The Attorney General’s Office got involved at this point and issued a letter of determination after this event telling the OPPL to stop violating the OMA. Healy later said she did not have to listen to the PAC because a letter of determination is “non-binding” in Klein Thorpe Jenkins’ opinion. See: https://www.youtube.com/watch?v=POrI0qetal4&list=PLILXCDHJg4yL-AlrgRxCYIIFANM-uSzIz&index=84

5. 2/12/14 = OPPL holds illegal special meeting on a state holiday in violation of the OMA’s prohibition on special meetings being held on legal holidays. The OPPL also would not allow public comment at this meeting. The Attorney General’s Office voided this meeting and made the OPPL re-vote on everything it did at this illegal meeting. See: https://www.youtube.com/watch?v=RxAi6HLwyHg&list=PLILXCDHJg4yL-AlrgRxCYIIFANM-uSzIz&index=82

6. 3/17/14 = Instead of holding new votes on all of the things it tried to illegally vote on at the illegal 2/12/14 secret special meeting, the OPPL tried to cure the illegality of those votes by just “ratifying and affirming” all the votes without holding proper recital and deliberation of the matters up for vote. In August 2014, the Attorney General’s Office ordered them to hold new votes and properly recite and deliberate the items up for vote.

7. 5/19/14 = Board President Nancy Wendt Healy makes statement that letters of determination are “non-binding” and the OPPL is not obligated to listen. Nowhere in the Open Meetings Act does the word “non-binding” (or “nonbinding”) appear.

8. In September 2014, Megan Fox and Kevin DuJan filed two lawsuits in Cook County chancery court against the OPPL for repeated and ongoing violations of the Open Meetings Act. This included illegal policies the OPPL had written and passed in August 2014 that censored the public, restricted free speech, and violated the First Amendment Right to Petition of the library’s critics.

9. 12/26/14 = the OPPL spokesman Bridget Bittman announced in the Orland Park Prairie that it would be removing all of the illegal restrictions it placed on public comment and the barriers it placed on public participation in board meetings. Bittman claimed that the decision to remove these restrictions had nothing to do with violating the Open Meetings Act (even though every change they made was specifically asked for in the lawsuits that Fox & DuJan filed against the OPPL).

10. In March 2015, the OPPL paid $55,000 to settle the lawsuits Fox & DuJan filed over Open Meetings Act violations. The settlement agreement directly contradicts what Bittman said in the Orland Park Prairie on 12/26/14 and the OPPL admits it changed its public comment policies specifically in response to the counts in the Fox/DuJan lawsuit.

11. 8/17/15 = the OPPL returns to its old ways, having learned nothing, by locking the meeting room doors and preventing members of the public from entering what was supposed to be an open public meeting.

13. 9/1/15 = Illinois Attorney General’s Office of the Public Access Counselor opens investigation #2015-PAC-37132, regarding the Orland Park Public Library’s violation of Section 2.01 of the Open Meetings Act (which provides that all regular meetings of a public body shall be held at specified times and places which are convenient and open to the public).

14. When will the OPPL start following the law and/or respecting the Attorney General’s office? 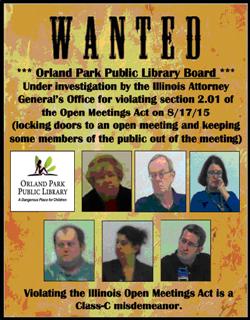