While we are waiting on the complete video to upload so I can publish an in-depth report on this week’s meeting full of whining, excuses, and everything else under the sun except for a genuine concern for the law and any resemblance of performance of duties by the Executive Director, I will post this short tidbit for your amusement.

“Of what avail is an open door to the public if the proceedings are secret.
The eye can see, the ear can hear, but secrecy conceals all.”
Attorney General Kerner (1933)

Under the direction of Joe Ewing (please click here) and the Park District Attorney, the Clark County Park District decided to “Recess” and “take a 10 minute break”.

As I said in a previous article, it is the attorney’s duty to inform the public body if they are seeking representation in a matter that is in violation of establish law. She not only failed to inform them, she participated in the illegal meeting.

Additionally, throughout the entire meeting, there were sidebar discussions between multiple board members and some even included the attorney and the Executive Director – while other board members were talking. This is not only disrespectful towards fellow board members, but it violates the Open Meetings Act by not speaking loud enough for all people present to hear what is being discussed, or deliberated.”

There is something new in every meeting with this bunch and the “leadership” shown by Chairman Ewing (please click here) is doing nothing but digging the hole even deeper – these guys threw out the shovel and have starting digging with a backhoe. 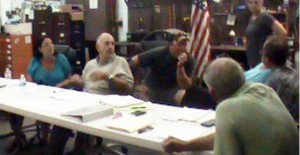