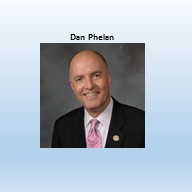 DuPage Co. (ECWd) - I have said it many times, and it appears once again the statement holds true.

You can't make this stuff up!

As referenced in this previous article on the Higher Learning Commission's visit to COD, Daniel Phelan, Jackson College President received a vote of no confidence and the Board did nothing. Actually, they did the opposite of nothing, they voted unanimously in favor of and approval of Phelan.  Well it turns out his wining and dining may just play the same role with Jackson Community College as it did with Breuder and COD.

Phelan is tainted with corruption and inappropriate spending at Jackson College and has no business serving on the Higher Learning Commission or any other public office under the circumstances.

From a 2007 Citizen Patriot article:

You can read the article below, which is filled with a massive amount of ethical and legal concerns.  I cannot understand how anyone with this type of behavior is allowed to be in charge of our children's education, let alone in a position to evaluate other schools.

Additional articles on events at Jackson Community College can be found here, here, here, and here.  And we wonder what is wrong with our society.

It makes me sick!