The College of DuPage held a special meeting last night, and in true form we find arrogance, ignorance, stupidity, and delusional behavior from those elected to handle a $200,000,000.00 Community College.

The reason I point to arrogance is because this trustee appears to forget she herself provided no options to the board or the tax payers when she was having a PR firm do work for her without any board approval.  It was OK for her to do things in secret with no other optional firms to select from, but now that she is not in control she chooses to cast dispersions on those trying to clean up a mess created under her watch.

Another example of her arrogance is her silence on Herricane Graphics.  A company owned and operated by a COD Foundation Board member who was awarded 2 no bid contracts for just under $190,000.00 that morphed into payments totaling over $620,000.00.  A contract in which the recipient claimed to be an Architect and they are not.  The public was not given any other option to select from and clearly Birt had no problem with that pay to play, but now, hiring of a firm by the interim President draws scrutiny from the Queen of Malfeasance.

That is Arrogance defined!

I digress!  She actually did do something.  She defended the violations by claiming it was justified since they were getting a higher return on the investment, all while failing to mention one word about the $2.2 Million dollar loss to the taxpayers.

During her presentation defending the violation, she failed to make one reference to the cover-up that took place, which was the hiding of the internal audit from the board.  She stated that she has yet to see the audit.  The fact the very people violating the law tried to sneak in a policy change to cover up their wrong doing garnered little interest from McGuire. She insisted nothing was done wrong in one breath, while admitting board policy was violated.

That is Ignorance Defined!

Stupidity is clearly applicable for Wozniak.  A person who does not understand a retainer fee of $15,000.00 is just that, a $15,000.00 retainer, has no business as a trustee.  After the board attorney announced that the financial firm being hired had agreed to reduce their retainer from $100,000.00 to $15,000.00, Wozniak asked if there was going to be a cap on the retainer.  When told the retainer is what it is, he said, and I paraphrase, “so $15,000.00 is the cap?”  It was clear he could not comprehend the difference between a retainer and a total expenditure.

That is Stupidity defined!

Wozniak is delusional if he thinks having the trustees join him in the soup kitchen is going to help bond the board so that they get along better.  Amazing to many is the fact he had no interest in trying to “bond” when he was part of the majority that allowed all the malfeasance to take place at COD.  Only now that he has been stripped of his travel perks, free food, and booze at the Waterleaf does he find himself on the outside looking in wanting to “bond”.

McGuire was one that claimed the illegal high dollar board meetings at the Waterleaf were justified because it helped the board “Bond” with each other.

Combine ignorance, stupidity, and delusional you can see how we go from 5 star dining to soup kitchens.

McGuire believes that her attendance at a local event, that had NOTHING to do with the College, is an event she should be reimbursed for by the College.  She claims to be an “Ambassador” for the college when she is out in the community, thus she deserved to be paid for those types of events.  With an Ambassador with this kind of attitude on spending it is no wonder we see both Federal and State criminal investigations going on.

That is delusional defined!

I refer to the Chicago Tribune’s Editorial Board who stated prior to the election 6 trustees needed to resign.  Now with the election over and half of those 6 gone, it is once again time to call for the resignations!  They have no business in public office and their actions speak louder than any words they can spew! 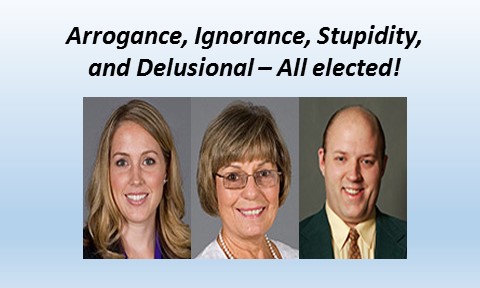