He starts out complaining about the “great hardship”  dealing with us while failing to mention their refusal to provide public records when requested.

He stated that Kirk Allen and I had sent 40-plus FOIA requests (as of the date of the letter), which is another lie. I guess if their attorney can lie to a Judge (article here), Corky Clark figured he could just make the number bigger and lie to Chapin Rose and Adam Brown.

He then tries to tie our FOIA requesting with some TIF extension that we were not even aware of, let alone attempting to help extend, since the example of TIF expenditures provided in our own local town of Paris, Illinois is enough to sour anyone on the prospect of TIF districts. So, lie number 3 in his attempt at connecting us with some “local group” promoting TIF.

Clark also states they do their “level best” to comply with FOIA requests and no matter what they send we are not satisfied. This is laughable at best, since they are still covering up their theft of public credit. I suggest they actually send the public records asked for, and to quit attempting to re-phrase a request for records as a question, then denying it based on being a question. Oh, and he forgets this attorney has stated that “transparency is a ridiculous word” when referencing FOIA and public records.

Then he shows his absolute ignorance of the law when he claims it is simply a scheme by us to make money. Mr. Clark, there is no money to be made in suing for public records and we would be happy if you would simply provide the records requested.

For the record, one of our first articles (here) on Arcola Township shows how the Township Secretary used the Township credit card to purchase fuel on a four state Harley-Davidson cruise, on a holiday weekend – which is felony misapplication of public funds and a Constitutional violation (Article VIII, Section 1(a)). Theft is a better name for it.

In a future article, I will show all of the invoices from Mark Petty to the township so everyone can see just how much money this township has spent since early in 2013 trying to avoid producing public records…and it is not over yet. 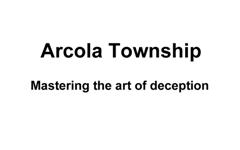