Arcola Atty: “Transparent Is A Ridiculous Word” & You Paid For A Vacation Trip –

After review a recent FOIA request from Arcola Township, one very telling item stuck out like a sore thumb. That “sore thumb” is a written statement by Mark T. Petty, Attorney for Arcola Township, in which he said “…transparent is a ridiculous word…” when he was talking about the Freedom Of Information Act and public records. If that is truely what you believe, Mr. FOIA Atty for Arcola Twp, please resign and let someone else do that job.

Another item for this article is that I received a copy of a credit card statement that showed charges made in several other states for small amounts. This “could be” attributed to candy, food, cigarettes, lottery ticket, OR gas for a 4-state Harley Davidson trip – which is why I requested a copy of the actual receipts instead of a copy of the credit card statement. Whatever the card-holder purchased was purchased with an Arcola Township Credit Card and the taxpayers of Arcola Township paid for it. You can view the map to see where these credit card charges were made. 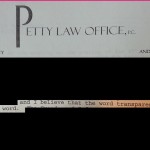 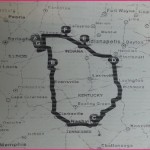 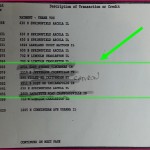 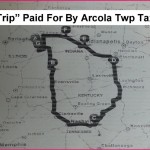