One of the fundamental requirements to continue to serve as an elected official (or appointed to an elected position) in an Illinois Municipality is to remain qualified for office. There are several ways to become disqualified to hold the office, and those are:

1. Not remaining a resident in the municipality of ward for which you were elected
2. Resignation from office
3. Becoming in arrears of a debt due the municipality
4. Others

Let’s talk about number 3 in this article.

(b-5) A person is not eligible to hold a municipal office, if that person is, at any time during the term of office, in arrears in the payment of a tax or other indebtedness due to the municipality or has been convicted in any court located in the United States of any infamous crime, bribery, perjury, or other felony.

The same applies to appointment to a vacant elected office.

“Arrears in a payment” is defined as payment not made in full, by the date due.

What can be done about disqualifications?

First, the persons disqualified can admit disqualification and simply resign – but this is not necessary because by violating paragraph b-5, that person automatically forfeited the office, and considering they have acknowledged being in arrears of a debt to the municipality (Daily Herald coverage) one would think the rest of the council would demand Justice for All!  Note that both councilmen presented an excuse for their situation, however, the law does not outline such a matter as an exemption to the arrears guidelines.   They were in arrears, they know it, regardless if they ever paid a late fee or not or if the didn’t realize there was a late fee.  It is not about the late fee, it is about being in arrears to the municipality. Documents show they both paid late fees.

Second, and this is what the Naperville City Council should do at their next meeting, is to look at the facts surround the question of McElroy’ and Wentz’ alleged disqualification and make a determination whether or not they were “at any time during their term of office in arrears of a debt due the municipality” of Naperville. Once that is determined, and the records show they  were in fact in arrears, the City Council simply declare the disqualifications and the seats are vacant. This option will be discussed later in the article.

Third, and the most undesirable of the available options, a Quo Warranto action can be taken in Circuit Court to ask a Judge to declare the councilmen disqualified, and declare the seats vacant.

Section 3.1-10-50 of the municipal code contains a more detailed description on when a municipal office becomes vacant in municipalities with a population under 500,000 , and Paragraph (c) states in part as follows:

(c) Vacancy by other causes.
(1) Abandonment and other causes. A vacancy occurs in an office by reason of abandonment of office; removal from office; or failure to qualify; …. The corporate authorities have the authority to determine whether a vacancy under this subsection has occurred. If the corporate authorities determine that a vacancy exists, the office is deemed vacant as of the date of that determination for all purposes including the calculation under subsections (e), (f), and (g).

Subsections e, f, and g talk about the time-lines for appointment and election to vacant seats.

How will Naperville City Council react?

That is the remaining question that needs answered at the next council meeting. Upholding the law would mean determining a vacancy, but I suggest they ask McElroy and Wentz to submit their resignations prior to the next meeting.

– View the documents of disqualification (arrears in a debt due the municipality): Late utility bills of McElroy (Pages 20 and 24 thru 27) and Wentz (Pages 88 thru 99). 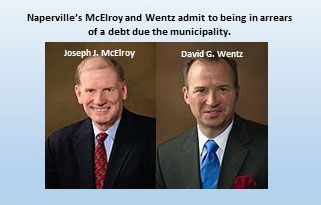