A Motion has been filed asking leave from the Court to file a quo warranto suit seeking the ouster of city alderman Beverly Church from office.

This is a quo warranto suit and is filed in the name of the People of the the State of Illinois, naming Bev Church as defendant.

A quo warranto is defined as "A legal proceeding during which an individual's right to hold an office or governmental privilege is challenged."

This is in the Illinois Code of Civil Procedure, found here, and states in part that:

Sec. 18-101. Grounds. A proceeding in quo warranto may be brought in case:
(1) Any person usurps, intrudes into, or unlawfully holds or executes any office, or franchise, or any office in any corporation created by authority of this State;

This motion seeks the ouster of Alderman Church from office based on her claimed, documented primary residence in Melrose Township - which is not in the city of Marshall.

I will add this photo of a facebook conversation that the commenter deleted. Just in case she comes back later and tries to say I deleted it... 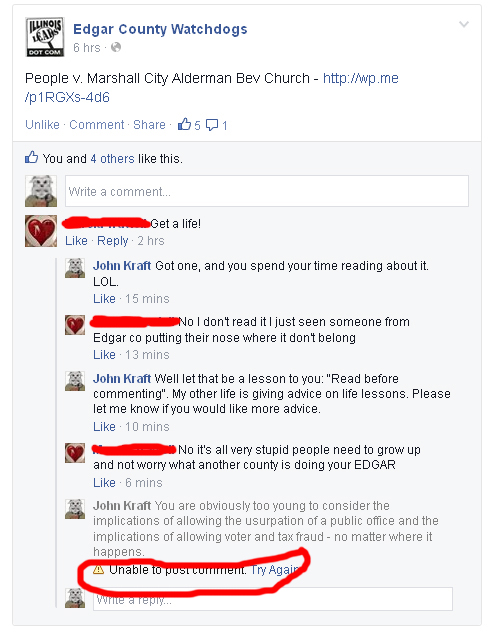