It has taken non stop diligence to keep digging and forcing the issue on what appears to be a very clear attempt at concealing the truth, and covering up the illegal activities of those who were running the Airport, which would be the puppet master, Chris Patrick and currently Jimmy Wells.

February 8th of 2013 I requested from the County Treasure, the sole person responsible for all funds in the county, all documents pertaining to the county owned CD held by First Bank 01-4012792-8.  Looking for all financial information related to that CD.

“I cannot find reference to this CD# at First Bank.  The number is similar to CD#s that First Bank would have, but it is not even close to any active or inactive CDs at First Bank.  Is there additional info you can provide that might assist me in narrowing my search down.  Thank you, Don Wiseman”.

After informing him I had evidence that county officials changed names on the CD in August of 2010 I received this response.

At 1:30 PM this response: “The treasures Office has no records relating to your request.”

At 1:44pm this additional response: “The Treasures office has no records pertaining to your request regarding any resolution”.

“I am now aware of the CD at First Bank.  I am also aware of one bank account at First Farmers that they manage but my office has never been on that account as “authorized” people.  So I cannot verify if this account reflects “pancake” revenue.”

February 25th I received this e-mail that basically affirms the Treasure is not going to get involved.

“I am not going to approach Jimmy or Chris to pursue this because I believe requesting this of them is beyond my authority”.

February 20th, 2013 I received this statement from Jimmy Wells regarding my request for the the CD in question. A CD that he assured me I could pick up a copy of during a discussion after the Airport meeting.

“The CD you are referring to was owned by a private donor and I do not have a copy of it. Thank You, Jimmy Wells”

So in a matter of just a couple weeks we went from claims there is no CD, I could pick up a copy of the CD, to a new claim it’s owned by a private donor.

More disturbing now is to find out that this was not the first and only CD as we have been told.  In fact, this CD was the consolidation of 4 other CD’s reflected in this Bank Document that was kept in secret from the tax payers as well!

That brings the total to 5 CD’s being managed in secret by those running the Airport, which Chris Patrick was the Chairman of the Airport Board as well as another bank account at First Farmers.

Those 4 CD’s were for some reason consolidated into one, which caused over $500 in penalties.  The consolidation formed the 2792-8 CD referenced above.

After uncovering this check from Citizens bank, which Patrick was on the (bank) board, we had more confirmation the lies and deception are an active process by everyone involved.

I requested more records pertaining to the source of these funds and sources assured us it was from a CD.  When I demanded the CD information again from Mr. Wells, this was his “new” response.

“I do not have any information about the CD, but to help answer your questions, I have a meeting with the bank, since this is a personal account, and the person is deceased the information may limited, what information would you like for me to obtain?  Please let me know  Thanks”

Lies because this check had nothing to do with a personal account because it was never a personal account according to the records! Mr. Wells again placed his lies in an e-mail.  He also claims the information may be limited because the person is deceased.   This is an orchestrated effort to keep the truth from the people.

April 18, 2013:  “The CD you are referring to was closed out from First Bank on May 31st 2011, a Cashier’s Check was delivered to the State of Illinois treasurer to be deposited in the airport fund account fund , ILL. Proj. Prg-4018. FEDE Proj. 3-17-SBGP-808588-94. I am mailing you a copy of the check and IL STATE Project Status Report confirming the transaction.”

So as you can see, we have gone from our treasure having no knowledge of any CD’s and unwillingness to demand their accountability, to Mr. Wells claiming it was a personal CD, and now Mr. Wells confirms not only that he did in fact know about the CD but he clearly was able to get key information about it because he was a party to the account!   In fact, his own Airport minutes confirm he knew about at least one CD!

So now that the pattern of deception is well in play with these people, maybe they could explain to the people of this county what gave them the authority to open up a Money Market Account.  This was done with both Chris Patrick and Jimmy Wells!

From a Money Market account to yet another CD with Chris Patrick and Jimmy Wells names placed on them, all with no knowledge or authorization from the county to do so, but more importantly, how is Jack Asher’s name removed from this CD as he had passed away and there is nothing in his will regarding this CD, nor have any authorizations been provided to have this CD issued in Chris Patrick and Jimmy Wells name!

So now we are at a total of 6 CD’s, a First Farmers Account, and a Money Market Account, All in Secret!

And the grandaddy of all documents that should raise everyone’s hackles is the content of the letter from the bank.

“The signed authorization was apparently misplaced, which can be attributed to human error.”

I contend there never was any resolution authorizing these accounts in the first place, but unfortunately I have no way to prove that other than confirming no one can produce such a record.  In the world of laws though, minutes are the record, like it or not!  No minutes in this county reflect any resolution to allow this laundry list of secret illegal banking activity with public funds!

Sadly, this is not much different than the illegal loan for the Ambulance that Jim Keller entered into with the bank without anyone’s knowledge.  That illegal act was also ignored by our officials to include the State’s Attorney, Mark Isaf.

As you can see, it’s clear that Mr. Wells has no clue how to be honest with the public as it relates to our tax money.  Let’s not forget his response to my questions about private use of public funds found in the audio in this article!

It appears clear to me that the pattern of behavior exhibited by Chris Patrick during his short tenure in office has rubbed off on Mr. Wells.  Many may recall that Patrick insisted there IS no CD when questioned, and in his mind the word game addressed their concern.  No Mr. Patrick, there is not any CD but you knew there were CD’s and you were a party to them and more!

It’s high time people wake up and start demanding from your elected officials that they remove Jimmy Wells from his post at the Airport, and demand our State’s Attorney start prosecuting public officials who do this with our money.

Mr. Wells’ lies have been exposed and the manipulation of our tax money, all in secret from the people elected to be responsible for it, shows he can’t be trusted, any more than Chris Patrick could.

From no knowledge of a CD, to 6 of them as well as another bank account and a Money Market Account, all under the watch of the Edgar County Airport Manager!

And for the record, we intentionally didn’t include the illegal loans with Illini Development Co. that also had no authorizations from the county! 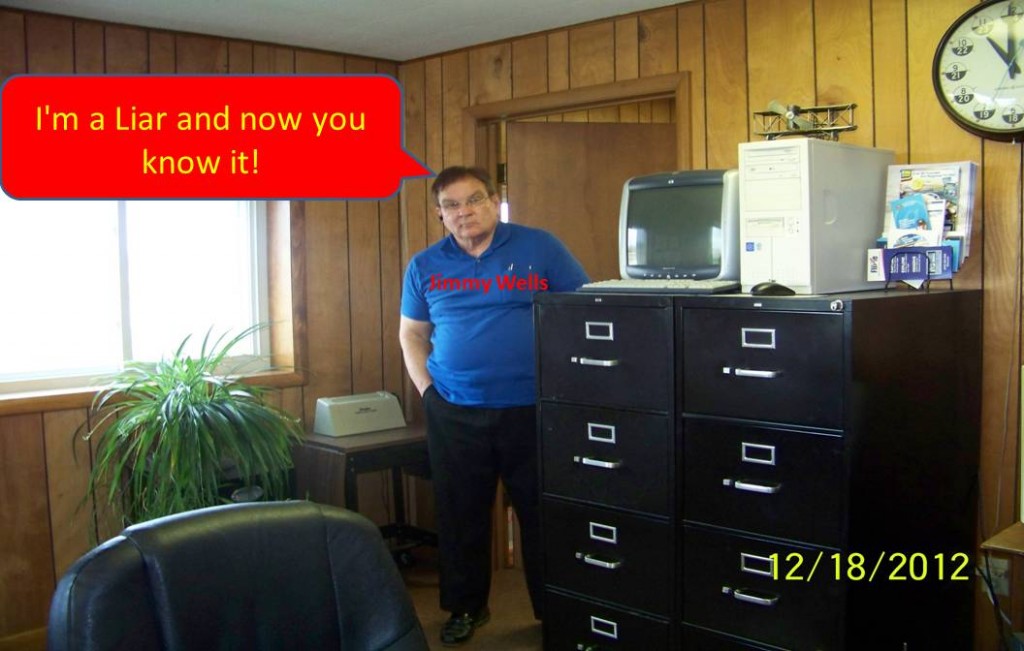