The Freedom Of Information Act civil suit filed against the Township of Arcola is scheduled for a “hearing on motion(s)” on September 5, 2013. Yesterday, I filed a response to the township’s motion to dismiss, and I also filed and sent a notification of hearing to their attorney.

The motion to dismiss, I believe, was based on the Township’s belief of improper summons service and their belief that there is no provision to name the township clerk as defendant among other things.

Township’s Motion —- My Response to their Motion —- Previous Articles Here 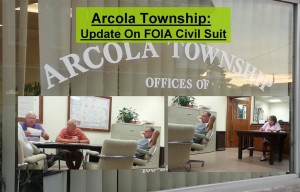