Can’t have it both ways -Unless you’re Chris Patrick!

It’s now official and straight from the horses mouth. Chris Patrick gets it both ways!

Chris Patrick clearly was proven wrong on multiple fronts yesterday and between the Highway meeting and the County Board study session let’s just say the facts are indisputable and Mr. Patrick can’t have it both ways, even though he insists otherwise.

After lengthy discussion on issues relating to the highway department and matters shifting to the well documented chain of events, it was clear from a visual perspective Mr. Patrick was agitated to say the least.

When it became time for public session it didn’t take long to put Mr. Patrick clearly on the defensive, as the Truth Has No Agenda.

Mr. Patrick insisted that the Airport Advisory board he sat on was strictly advisory and that they have no authority to take action.  They only advise the county Board, blah, blah, blah!  This is important as he walked right into it!

Mr. Patrick has been less than honest with the people of Edgar County and the audio proves it.  You see, in his insistence that the Airport Board is advisory only and that payments to him were not approved by the airport board, even Karl Farnham jumped in for a brief moment to side with Mr. Patrick.

Thank you so much Mr. Farnham as you stepped right into the very trap I had hoped for.  Mr. Farhnam is correct, the Airport Board is suppose to be only advisory and they didn’t vote to pay Mr. Patrick for the Ready Mix that he has now admitted he sold to the Airport.

What Mr. Farnham and the others have failed to realize, before the payment can even be an issue, someone had to approve the ordering of the Ready Mix!  A key point in all the garbage coming out of Mr. Patrick’s mouth because if we are to believe Mr. Patrick, then the airport board would have had to first bring the project to the County Board for approval.  An action that never took place based on the minutes!

As I pointed out that fact, it was clear Mr. Farnham agreed based on his facial expression, although he stayed silent.  Facts don’t lie.

Chris Patrick clearly lied about the Airport Advisory Board being strictly an advisory board.  While Chairman of that board, numerous projects took place at the airport that he was in charge of as chairman, and of those projects involving ready mix, no advice or anything else was provided to the County Board for authorization to move forward.  Mr. Patrick does what he wants!

The other thing Mr. Patrick tends to do is fabricate events to support his cause.  Most call that a lie.  You be the judge!  In the communication to Dr. Shea, Director of IDOT Aeronautics, one little statement in her response is the key!

“Also please provide the list of violations that caused your board to terminate the lease.”

How does anyone suppose Dr. Shea concluded the “board” terminated the lease?  We all know that didn’t happen, yet the question from Dr. Shea points to the fact she was told the board did.  Considering her communication is with Mr. Patrick it’s a safe bet, especially after yesterday’s meeting, it was in fact Mr. Patrick that lied to her on that subject!  Lied because the letter from Dr. Shea predates and reflects the board terminated the lease and Mr. Patrick confirmed, that is not what happen! I wonder how the head of IDOT aeronautics would feel if she knew Mr. Patrick lied to her?

During the County Highway meeting Mr. Patrick made it very clear the Airport Board was Advisory only.  Then, when confronted with the facts from the IDOT communication he couldn’t stop squirming in his chair.

From one excuse to another, the facts came out!  Mr. Patrick claimed the board took action to have the Airport Manager take the action.  Several problems with that lie.  The first being no such mention of  a lease issue can be found in ANY of the airport minutes clear up to Mr. Patrick’s departure from that board, even though he insists that’s how it happen.

The point that he is a liar is driven home with yet another simple fact.  Mr. Patrick acknowledged the board directed the Manager to take action!  Action that lead to the termination of the lease RSB Aviation had with the airport.

Mr. Patrick, if the board is advisory only as you clearly claim, can you please tell the good people of this county what gave you the right to take action in directing the Airport Manager to take action on a lease which he has no authority over?

If what you say is true how is it that not a single shred of that claim can be found in the minutes, but even if it had, it would reflect the so called Advisory Board taking action instead of providing advise to the County Board!

The action Mr. Patrick claims they authorized is yet another example of how the rules don’t apply to him, and when trapped with the truth the question is always: Are you done?

Mr. Patrick also tried to justify selling Ready Mix to the county in December because the contractor wanted to go just a little further on the project.  The implication was that since the contractor was doing the job it made it OK.

As I clearly pointed out, Mr. Patrick didn’t sell Ready mix to the contractor!  He sold it directly to the county!  The audio of that exchange is quite telling, especially after reading the paper today reporting this position for Mr. Patrick:

“Patrick holds it is not a conflict because he is not a contractor bidding on projects and would supply concrete only if the contractor choose to buy from him”.

So Mr. Patrick, if your claim is to have any merit, then by your own admission, the selling of concrete directly to the county WOULD be a conflict and that sir is exactly what you did!

I think the best part of this whole audio file from yesterday’s second meeting is the fact Mr. Patrick clearly demands “he can have it both ways”, unlike any other person in this county!  If that is not the best part of the meeting, then it has to be the first meeting where Mr. Bruner clearly proved Mr. Patrick wrong with a copy of a set of Airport Minutes that proved Mr. Patrick was a voting member of the board, contrary to his insistence that he only votes if there is a tie.  Minutes that Chris “claimed” “if their is a tie” and Mr. Bruner clearly proved that language is NOT in the minutes as Mr. Patrick implied, nor does Mr. Patrick’s actions on that board support such a claim!

No, Mr. Patrick I am not done, nor are the good people of this county!  You will be held accountable and justice will be sought at every venue possible.

The audio files speak for themselves! I am confident the good people of this county will listen to your lies and double speak and become more embolden to demand your resignation at a minimum.

The minutes prove what Mr. Patrick lied about the Airport being advisory only.  They will also prove projects were awarded prior to bidding ever taking place, all at the direction of Mr. Patrick!   Clearly, for years, that board took numerous actions on their own and rarely advised the county board.  Those actions include, as was confirmed in the audio, Zimmerly Ready Mix sold over $7,000.00 of materials to the airport and had no documented authorization for those materials to be ordered nor any Advice provided to the County Board for them to approve such a purchase.

Mr. Patrick you have lied to the people of Edgar County! 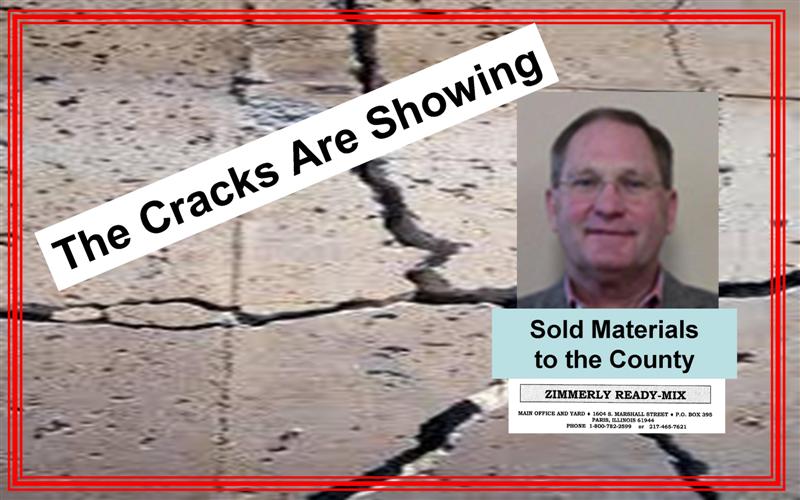