There is a meeting on Wednesday, March 20, 2013 between IDOT Council and the Edgar County State's Attorney to discuss the Conflict of Interest issue.

Personally, I am confident that IDOT is going to stand firm as it relates to the Conflict of Interest they have acknowledged to Edgar County officials.  It would make no sense for them to back peddle now after months of standing firm on the documented fact a Conflict of Interest exists.  To back peddle could potentially open up IDOT to legal action for lost business by Mr. Patrick, although I don't think he could ever convince a jury he was harmed.

I also believe the reason the recusal letter that would have initially made it OK for Chris Patrick to continue in his capacity as Chairman was based solely on the Federal Statute, with no regard to the State Statue, and the fact he said he would not sell materials.

All bets are off when three things happen.

So what does it mean if IDOT stands firm on their position and what is the impact it will have on Edgar County?  It will all depend on Chris Patrick and Mark Isaf.   If Mr. Patrick would resign all funds could be released and this county could get back to doing the people's business, and Chris could sell his ready mix to the county.  County wins, Mr.Patrick wins.  It's amazing that this solution has been met with such resistance by Mr. Patrick.  It all points to another agenda as it relates to Mr. Patrick but we will save that for another article!

Chris Patrick has stated he will do what ever Mark Isaf tells him.  If IDOT stands firm, will Mark Isaf agree with their legal position and advise Chris Patrick to resign?  If he does ask him to resign and Mr. Patrick refuses, a few options are clearly on the table.

With the meeting being held Wednesday of this week, we can only wonder how long before a stance is taken or a resignation offered.

As the most improbabe possibility of all, we must acknowledge a possibility does exists that IDOT will be convinced by Mr. Isaf that no conflict exists.  If that is the case IDOT would release funds, sign plans and agreements, which would mean Mr. Patrick stays on as County Chairman and continues to sell Zimmerly Ready mix to county projects.  If this happens, all hope is lost for any law enforcement in this county as it relates to our State's Attorney and public corruption.

I don't believe for a second this last possibility will happen! 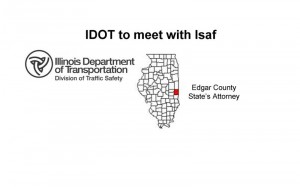