Ford-Iroquois Public Health Department -What did we find?.

The primary complaint we received was that the Multi-County, Ford-Iroquois Public Health Department (FIPHD), in Watseka, was spending money like it was growing on trees and there were serious allegations of insider deals, which is not an uncommon complaint we hear from just about every county asking us to help out, which happens to be a number that we simply can’t keep up with!

The secondary concern was a duplicate of what we found right here in Edgar County, as it relates to the Emergency Telephone System Board hiring a private attorney.  An act that is not legal!

As mentioned in our previous article found here, I submitted a FOIA request to the FICHD that can be seen here.  Over the past  several years we have learned what to look for both in what is sent and ignored, and in this case, credit card statements were ignored!  Second FOIA submitted that can be seen here.  After receiving selective information we sent two more requests, here and here.

The first thing that jumped out at me was the fact that the FOIA officer called me from a Southern Illinois phone number, which is nowhere near Watseka, Illinois.  Upon looking at contact information on their web site it’s clear the FAX machine is in Southern Illinois as well!

Primary things that jumped out in less than two hours of review!

It didn’t take long to to see there is definitely a problem with what is going on as it relates to spending.  Once you figure out the spending you have to look at who is doing the spending and tie those puzzle pieces together.  The key to that is to read the minutes!

The biggest issue that stuck out is the Solar Panel Purchase, the company that received the bid, and the company that got paid for it as it relates to who works for the very office doing the purchasing.

I failed to include a 4th company so it was included in this correction.  Excluding Day & Nigh Solar, the other three companies are all the same tax ID # because of name changes over the years starting with Best Building first(1996-2004), then changed to Strictly Business(2004-2011), and finally becoming CMS Renewals as of April 2011.

Who is Julie Clark?

Question for Ms. Clark: How do you work for a County Public Health Department in Watseka, Illinois when by all indications you operate out of Maryville, IL.?  (225 Miles apart, ONE WAY!)

With all those titles you would think she would have filled out an Economic Disclosure Statement but turns out she has not!  Not all that different than past public officials in this county.  You may recall our past Sheriff didn’t fill one out for several years!

She is also the sister to Deanna Lustfeldt who was convicted of embezzlement from the Watseka Bank in the US District Court in Urbana.  Her defense attorney, Lawrence Beaumont, a former federal prosecutor, argued that mental disorders caused her to commit her crime.   She currently works at the Iroquois Mental Health Center! (Gazette article here)

It appears to be quite the family operation in parts of Iroquois County and the Health Department minutes even adopted the policy to be able to hire family members.

We have asked for a copy of their personnel policy and ethics rules but were told that request is to unduly burdensome.

We are continuing to compile more information as each FOIA leads to more disturbing facts.  A quote from the local news paper would indicate they concur there is a problem.

We have been in regular  contact with officials in Iroquois County, and are elated that our brief efforts of assisting those who reached out for our help, have taken appropriate steps so quickly that are leading to fixing the problem and from what we understand, possibly future prosecution for numerous alleged criminal acts by public officials!

Amazing to us is the fact that in less than 2 months, investigations are underway, board removals taking place, and potentially prosecutions will come.  All from just a few hours of looking at transaction histories and pointing out red flags for further investigation!

More amazing to me is how nothing gets done in this county with over 2 years of documenting basically the same type of activities!

Today the Iroquois County Board Chairman provided us this Press Release. The County Board took its first step of removing County Health Department board members!  We appreciate him recognizing our efforts in assisting accountability to all our government bodies! 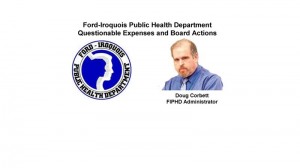