In a previous article, we briefly discussed the Housing Commissioners lack of response to questions submitted in reference to certain funds and how the money was spent. These questions were originally sent on September 11, 2012 – almost 4 months ago! We discussed how they sat silent during the November 21, 2012 meeting, insisting their response of “no response” was sufficient.

(310 ILCS 10/7) (from Ch. 67 1/2, par. 7)
Sec. 7. No commissioner shall receive any compensation, whether in form of salary, per diem allowances or otherwise, for or in connection with his services as a commissioner, except that the Housing Authority in any municipality having over 500,000 inhabitants may establish by resolution a reasonable salary or per diem allowance for the services of the commissioner who serves as chairman, and except that in an Authority created by a municipality or a county having over 25,000 inhabitants the corporate authorities of the municipality or county may establish a reasonable per diem allowance for the services of commissioners, to be paid by the municipality or county from funds budgeted by the corporate or county authorities for that purpose. Each commissioner shall, however, be entitled to reimbursement out of funds available therefor, for any necessary expenditures in connection with the performance of his general duties or in connection with the construction or operation of any project. The Authority may allocate such expenses among its projects in a manner as it may consider proper. An Authority created by a municipality or county having over 25,000 inhabitants may also provide for the reimbursement, from funds of the Authority, of any travel expenses incurred by the commissioners for travel in connection with their duties.
(Source: P.A. 87‑200; 87‑657.)

– “No commissioner shall receive any compensation, whether in the form of salary, per diem allowances, or otherwise, for or in connection with his services as commisssioner,…”   This sentence is pretty much self explainatory and the legislative intent is clear.

–  Counties or municipalities having over 500,000 inhabitants may pay a salary for the commissioner who serves as chairman – does not apply to Edgar County Housing Authority.

–  Counties or municipalities having over 25,000 inhabitants may pay per diem to the commissioners – does not apply to Edgar County Housing Authority.

– Each commissioner shall be entitled to reimbursement for any neccessary expenditures in connection with the performance of his general duties… – This is saying that if a commissioner expends monies, ie: buys printer paper, ice melt, etc. for the Housing Authority – then he is allowed reimbursement for those expenses  – this should not be confused with per diem. This applies to all Housing Authorities.

–  Counties or municipalities having over 25,000 inhabitants may provide for reimbursement of any travel expenses incured by commissioners in the connection with their duties. – does not apply to Edgar County Housing Authority.

The population of Edgar County is less than 25,000, therefore the first sentence in paragraph 7 applies with respect to everything except “neccessary expenditures”:  No commissioner shall receive any compensation, whether in the form of salary, per diem allowances, or otherwise, for or in connection with his services as commisssioner,…

This means that the commissioners of the Edgar County Housing Authority cannot receive any compensation, per diem or otherwise. This would include mileage to meetings, and all expense paid trips every year to the Housing Authority Association Conferences – none of this is authorized!

Guidance From HUD – U.S. Department of Housing and Urban Developement

In an attempt at getting guidance from the National Association of Housing and Redevelopment Officials (NAHRO), Mr. Hollis sent an email to his Illinois NAHRO representative, and then finally an email to Linda Eller from the Chicago HUD Office asking for guidance.

Linda Eller responded with (click here to read the emails):

“According to our Legal Division, the Board of Commissioners can be reimbursed for travel expenses, even if the municipality or county has less than 25,000 inhabitants.”

Wow, that’s a pretty bold statement from a HUD representative and apparently from the HUD Legal Department! Sounds pretty cut-and-dry doesn’t it? – Not so fast!!!!

HUD Flip-Flops When Asked To Put It In Writing

On the surface, it appeared to be a legitimate response. But within the past 18 months or so, I have come to the point of verifying any information received, so I sent an email to Linda Eller (click here to read email) asking for the contact information of the person in their Legal Department who made this decision. I also advised her that my intent was to obtain this advice in writing from their legal department.

Advice changed when asked to put it in writing! The response given to my email was a complete reversal of their initial response, and apparently Mr. Richardson from the legal department (?), directed Linda Eller to reply with this:

“After receiving your email, and after further discussion with our management staff, I was directed by Mr. Richardson to issue the following: The Housing Authorities Act (310 ILCS 10) from the Illinois Compiled Statutes supersedes the Title 24 Code of Federal Regulations as it relates to reimbursement for travel expenses for Commissioners. The Housing Authority was established by the County of Edgar, under Illinois law.”

Now the HUD has reversed their initial advice on reimbursement to commissioners – so we are back to where we started from, and the point of our first allegation, that the commissioners of the Edgar County Housing Authority cannot receive any compensation, per diem or otherwise.

Now that it is clear the Edgar County Housing Authority (ECHA) Commissioners cannot be given per diem, or mileage, to attend meetings, you would think they would write a check and pay the money back to the housing authority. The amount they were given, in violation of the law, just this year is almost $520 total, (click to view document) to attend meetings. Some of these mileage claims are fraudulent claims, that if proven fraudulent (and we can prove it) could result in felony charges of false claims, submittion of false reports, accepting fraudulent payments, and official misconduct, among other things – we’ll talk about those claims in another article.

Whatever the motive may have been, all of these payments should be immediately recovered from the commissioners.

“The Conference” In Florida

Attendance at the NAHRO Association conference in Ft. Lauderdale, Florida in January of 2012 costs the Edgar County Housing Authority well over $10,000. Of that $10,000, only the housing authority director was authorized by law to be reimbursed for expenses – this leaves about $8000 that needs paid back to the housing authority! (click here to view the documents)

Then you have to add the FACT that public credit was used for personal benefit, such as charging spouses airline tickets, charging spouses luggage fees, paying spouses entry fees into the conference, I could go on forever… These are in violation of Article VIII of the Constitution of the State of Illinois – “Public funds, property, or credit shall be used only for public purposes“, – violations are considered felonies.

The commissioners also received $600 each for “expenses” while they were in Florida – it was paid in December 2011, so I am assuming it was for the Florida trip and not an illegal Christmas present. Even their attorney, Rob Anderson, received a $600 check – you would think he would know better, but I guess not.

It was worse during the 2011 Conference, but that will be a different article.

Apparently there are 48 other housing authorities in Illinois operating in counties or municipalities with under 25,000 inhabitants – and they are all doing the same thing!

Future articles will expand on at least one commissioner with an incompatible office, fraudulent mileage claims, some spouse credit card charges not reimbursed, contract conflicts with an employee, catered Thanksgiving and Christmas parties on your dime, and other items. 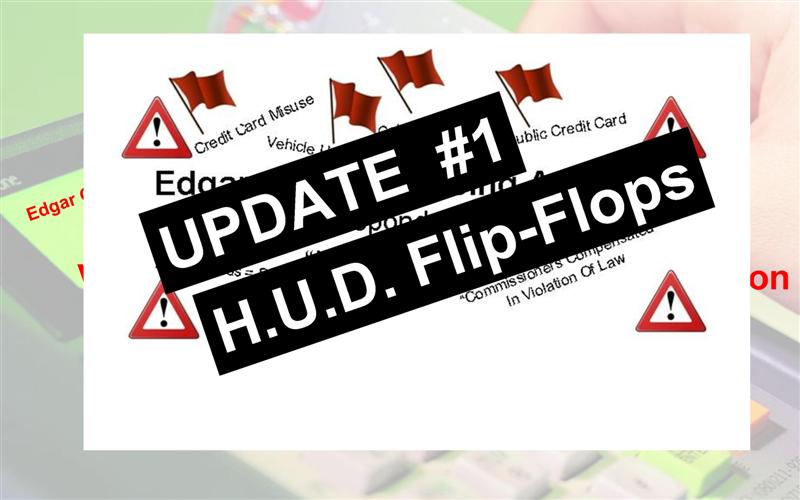