We have been looking at the Edgar County Housing Authority (ECHA) for over six months now, trying to get a feel for how they are using the Public Funds given them. The employees working there are doing an outstanding job and are an asset to the Authority residents and to the citizens of our fine County. The place always appears to be well kept.

This article is geared more towards those in charge, the commissioners and director, as they are the ones burdened with setting the example for their employees and tenants to follow. If they can’t follow the law, how can they expect others to follow it?

An Oath is a contract to uphold the laws of this state and the laws pertaining to their positions – there must be consequences for willfully breaching this contract – anything else is solidifying the Culture of Acceptance citizens of this county have become accustomed to. Holding a Public Office is, or should be, an honor. Public officials take an oath, and that oath has to mean something – it has to count for something! – for the breaking of that oath is the breaking of a contract and sacred trust.

A few things immediately stood out :

All the Housing Commissioners, and the attorney, are issued credit cards.

Housing Authority credit cards were use to purchase items for spouses of the commissioners.

Commissioners, and their attorney, were paid to go to conferences in Florida: $600.00 up front, plus: flights, hotels, food, taxis.

Large amounts of catering occurred just prior to Thanksgiving and Christmas.

Employees were allowed to contract with the Housing Authority.

There are more, but these are the items worthy of attention and we will elaborate on each of them.

In the interest of fairness, and thinking we might have missed something or were looking at the wrong statute,  we did submit a list of questions, prior to their September 2012 meeting, for the housing board to answer and we were expecting answers – but instead a “no action taken” was entered into their October 2012 meeting minutes. So, for the record, we did seek their advice or opinion on these issues; in writing and during the November 21, 2012 Housing Authority Meeting we attended.

No Commissioner Shall Receive Any Compensation…

As we always do, we first look to the statute governing the public body we are concerned with. In this case it is the Housing Authority Act, 310 ILCS 10.

We did a quick scan for duties and responsibilities of the commissioners that are appointed by our county board, and we know they’ve (county board) done a stellar job with their appointments in the past…Housing Authority Commissioners are the same as trustees or board members in other public bodies.

(310 ILCS 10/7)(from Ch. 67 1/2, par. 7)
Sec. 7. No commissioner shall receive any compensation, whether in form of salary, per diem allowances or otherwise, for or in connection with his services as a commissioner...

What a paragraph that one is! My non-attorney mind tells me, upon reading it, that NO commissioner can receive ANY compensation. Period. End of story.

-That should just about take care of the fact that the Commissioners were paid to go to conferences in Florida: $600.00 up front, plus: flights, hotels, food, taxis. That sure looks like “compensation, per diem allowances or otherwise,” to us.

-As far as the commissioner getting paid mileage to attend housing authority meetings – that is considered compensation and is not allowed.

Felonious Use Of Public Credit Cards…

-Then we have to consider that the Housing Authority credit cards were used, by the commissioners, to purchase items for their spouses. This act is considered a felony in Illinois, whether it’s paid back or not.

Why is it that so many public officials and employees, especially in Edgar County and the City of Paris, cannot comprehend those eleven words?

What goes through their minds when they whip out the trusty ole gub’ment credit card to pay for things they are not allowed to buy?

Why is nobody held accountable?

What happened in this case, is using the PUBLIC credit cards before and during the conference in Florida, where items not used for public purpose were purchased. Yes, they did reimburse the Housing Authority, but it is still a violation of Article VIII of the Illinois Constitution (the City of Paris knows all about that pesky little Article).

In November and December of 2011, there were two large purchases of catered food, totaling over $700 each month. I presume these were for Thanksgiving and Christmas parties for the commissioners and staff of the Authority. That is also considered compensation.

*******The board refused to comment on these catering bills – which, in our experience, usually means they know it was wrong and will not admit it.******

Housing Authority vehicles are Public property, so we look back to the constitution for guidance:

What do you know, property misuse is also a violation of Article VIII in this state. Using an Authority vehicle for personal errands, and for attending to your private business, is misuse and abuse of public property in direct violation the Article VIII.

I drove past a local business several times, at different times of the day, whenever I happened to be in Paris. While driving past, I noticed a truck parked there with municipal license plates. I decided to find out what public body owned the vehicle. It turned out it was a Housing Authority vehicle, so I snapped a few pictures.

Kudos to the Director and Commissioners for taking action on this! They have instituted a new “Vehicle Use Policy” to put a stop to this type of misuse. Let’s hope they monitor it from time to time.

The ECHA has an employee that also “contracts” or otherwise gets paid to perform work for the ECHA at his private business.

We believe this “contract” would be for cleaning window blinds, etc., but the Board would not answer this question.

The ECHA has used Public Funds to sponsor a junior league sports team.

This was just a quick scan of public documents we received from the ECHA – I’m sure there is more.

What makes this different from other county organizations is that this one receives its money from Federal Grants.

So in addition to violating the very act that governs the housing authority, it might have used federal money to violate the law.

Rest assured, this is only the first of several articles on the ECHA; future articles will expand on each individual item above (and then some more), with names, and provide the documents obtained from the Housing Authority for your viewing. 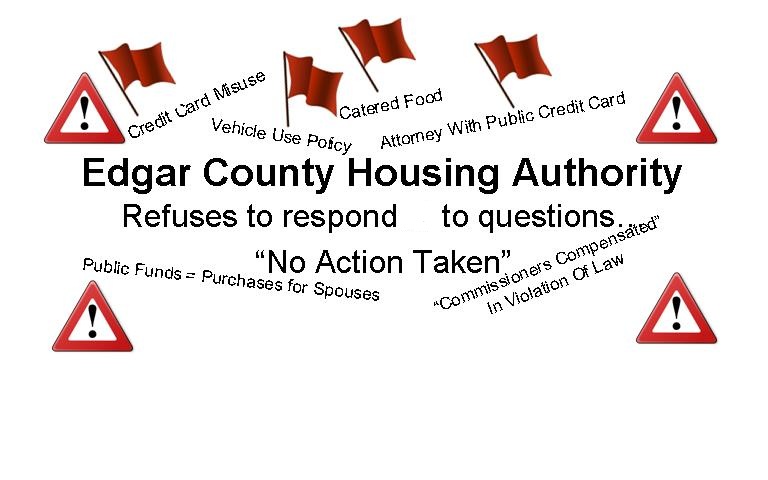