Who truly got the ISP involved to investigate the Official Misconduct of the jailers Kent Rhoads and Jason Ball?  The investigation reports reveal some very interesting questions.

In an ISP interview report Debra Dee Ford received information that concerned her enough to contact the past State’s Attorney, now sitting judge, Matthew Sullivan.  She did that between June 16th and 17th of 2010.   Ford said Sullivan referred her to the Zone 5 Office.

She contacted the ISP and was interviewed on June 18, 2010 with the above referenced information exposed.

We know based on the timeline in the ISP reports this particular interview PRE DATES the June 21st, 2010 date!  Remember that day?  That was the day the ISP reported that the State’s Attorney Matt Sullivan requested ISP assistance in an investigation on the jailers.

A citizen who reported a real concern to the State’s Attorney was told to take the matter to the State Police and then 4 days later he contacts them to investigate as well?

Why did it take 4 days for that request to happen?

Is it because the citizen’s complaint unfolded clear questions pertaining to rampant inappropriate behavior by public officials that lead to the ISP contacting the State’s Attorney and informed them there was in fact a problem in the Edgar County Jail?

“Show me your boobies and you’ll get a coke”

Beer, Vodka, Pills, Wild Turkey, Food, Phone, Needle, Phone Cards, Laptop, Drinks, Necklace, Rings, Cloths, Smokes.   Just a few of the things Kent Rhoads and Jason Ball provided to the inmates of the Edgar County Jail in what appears to be all in exchange for sexual trysts with inmates.

Love notes from an inmate to Kent Rhoads, who from the reading was having quite the relationship/affair with an inmate:

“My suggestion would be to forget about Jason and the lights.  If you really need one, go buy one in the bathroom at Wal-Mart or something.  You’re running out of time and I want it!”

How many of the things we heard on the street as “rumors” match what is in the ISP file?

And the best one listed in the laundry list of inappropriate behavior of our public officials:

17. Shane St. Clair is with them on all these things – they all cover them up!

Moral Fiber, Integrity, Dignity, Justice?  Many of the above mentioned things I personally had heard numerous times and many we have in fact uncovered prior to reading the ISP file so one has to ask a very important question.  When this information was presented for prosecution of the jailers, who the hell dropped the ball on DEMANDING an investigation into the Sheriff and his “LOYAL” deputies for their actions and attempted cover up of felony crimes?  Is that not in itself an act of Official Misconduct by the State’s Attorney’s office?

This whole multi part story is not just about what these criminals did but more so to expose the pattern of behavior that has become the norm that is responsible for the ongoing decay of our society and it starts from the top!

“The Rules of Professional Conduct are rules of reason. They should be interpreted with reference to the purposes of legal representation and of the law itself. Some of the Rules are imperatives; cast in the terms “shall” or “shall not.” These define proper conduct for purposes of professional discipline.”

“Lawyers play a vital role in the preservation of society. The fulfillment of this role requires an understanding by lawyers of their relationship to our legal system. The Rules of Professional Conduct, when properly applied, serve to define that relationship.”

“Competent handling of a particular matter includes inquiry into and analysis of the factual and legal elements of the problem, and use of methods and procedures meeting the standards of competent practitioners.”

“The duty of a public prosecutor is to seek justice, not merely to convict.”

From a cocaine snorting state’s attorney, police that violate our constitutional rights, to criminals in public office, this county has turned a blind eye to the importance of scrutiny in their selection of their public officials and in many cases chosen personal benefit as the deciding factor of who they support.  The two-party system is what we have, however it has been corrupted by ignorance of history.  History reflects that the fall of empires began with the decay of morals which lead to accepting wrong as right.   That very thing has happen in this county and many of you know in your hearts it’s true.

Karl Farnham does not worry about things we raised regarding his tenure as Sheriff and his response is “it’s past the statute of limitation”.

Interesting he didn’t deny the wrong doing but instead focused on the statute of limitations as a means of protection from prosecution of those wrongs!

I will close out this series this weekend with Part V and I pray the good people of this county read, understand, and study the facts that have been ignored by our public officials and demand accountability!

Take Back Your County! 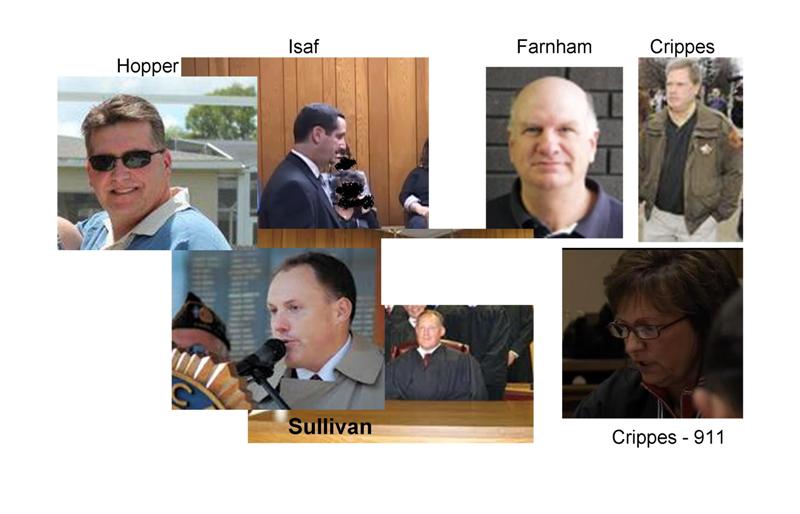