Declaration of Independence – A Lesson in History!

July 4th has been a Federal holiday since 1941, officially, but the history and tradition of what is less commonly known as Independence Day dates back to the 18th century and the American Revolution.In June of 1776 the representatives of the 13 colonies, then fighting in our historic revolutionary war, weighed a resolution that would declare their independence from Great Britain. It was drafted by Thomas Jefferson in June of 1776 however he had assistance in that process from Sherman, Franklin, Livingston and Adams.
Our Declaration of Independence is the nation’s most cherished symbol of liberty and Jefferson’s greatest work in my opinion.   Jefferson was able to express on paper the convictions of the American people’s hearts and minds. The political philosophy of the Declaration of Independence was not new.  History reflects that the ideals of individual liberty was previously expressed by John Locke and the Continental philosophers.  What Thomas Jefferson accomplished was to summarize this philosophy in “self-evident truths” and set forth a list of grievances against the King in order to lay the foundation and justification of separating the connection between the colonies and Great Britain. The actual approval of the Resolution of Independence was passed in Congress on July 2nd 1776. John Adams wrote the following to his wife Abigail:

“The second day of July, 1776, will be the most memorable epoch in the history of America. I am apt to believe that it will be celebrated by succeeding generations as the great anniversary festival. It ought to be commemorated as the day of deliverance, by solemn acts of devotion to God Almighty. It ought to be solemnized with pomp and parade, with shows, games, sports, guns, bells, bonfires, and illuminations, from one end of this continent to the other, from this time forward forever more.”

John Adams was off by two days as it was July 4th that Congress signed the Declaration of Independence and it appears most have forgotten, assuming we still teach it, that it was July 2nd the original resolution was passed!

John Adams and Thomas Jefferson are the only signers of the Declaration of Independence that later became  Presidents and died on the same day, July 4th 1826!

James Monroe, although not a signer of the document but was a founding father of this great nation died on July 4th, 1831 becoming the third president in a row to die on the 4th of July!

May we remember the great sacrifices from those before us who did so much for so little personal gain. Those men laid a foundation for great potential that we must no longer squander away.   They understood the God Factor in this great country and I pray that each day more and more people will learn that it is “We The People”, with Gods Blessings that make this country what it is.

Seldom is it the numbers that determine the outcome, but whether those who claim to be good men are willing to stand up and fight for what they know to be right. (Wayne Gresson)

“All that is necessary for the triumph of evil is that good men do nothing.” (Edmund Burke)

Those who do nothing about sin and evil, help the sin and evil to prevail. One who is silent when there are those around him in sin becomes a partaker with them (Eph. 5: 7).

This Country will be what you make it! Those who are not actively and vigorously fighting against evil are helping evil to triumph. What are you doing?

Save what our founders fought and died for! 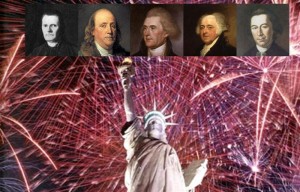