Phantom of the Office

Phantom of the Office

During extensive background work on former State Representative Roger Eddy it became clear that he had involved his son in numerous parts of his political circles to include, we assume, a full-time job with the State Comptroller’s office which is where he currently is employed with let’s just say, a pretty sweet deal.

The first FOIA request laid the groundwork for some interesting reading.

With that information we then have to look at his job Description.  That is where things get interesting.  (Download Here To Read)

Mr. Eddy is supposed to introduce Local Claiming Entities (LCE’s) to the local debt recovery program according to his job description.  So, in the 1 ½ years of hard work by Mr. Eddy, how many local entities has he introduced to the program, which we identified from our FOIA request?

To put that in perspective, Edgar County has 15 Townships, 5 School Districts, 1 County Government, 9 Fire Districts, several soil and water districts, numerous villages and the city of Paris.  I suspect you could hit the 40 number just in one county!

Next we look at the list of entities Mr. Eddy actually assisted to sign up for the program.

Why is this significant information?  Did you know Illinois ranks FIRST among the states in number of local governments, with 6,994 as of October, 2007.  So basically in 1½ years Matt Eddy has worked so hard that he actually introduced a whopping .5% of the state’s public bodies to the program outlined in his job description.  To put things in perspective, in 1 ½ years there is 18 months, so if Matt Eddy would have worked really, really hard, he would have had to work with 2.2 public bodies a month in order to accomplish the overwhelming number of 40 government entities!  WOW!  Now that’s called getting a buck for little bang!

Now the next one is pretty amazing considering what his job description requires.

“Maintaining records of progress and action”

Response to our FOIA request:

The Comptroller’s office does not possess any responsive documents.  The LGDR program is new, and therefore the office is still developing it and determining how best to track its progress.

Unless I missed something, wasn’t it Matt Eddy’s job to “maintain records of progress and action”?  Mr. Eddy has been in this position for over a year and they don’t have a means of tracking a program implemented by the Comptroller’s Office?

Next came the request for a complete copy of the required paperwork filing to L.T., legal, and administrative staffs in Chicago and Springfield as outlined in his specific job description.  Any guess what the response was to yet another mandated duty for Matt Eddy?

No documents responsive to our request!

The next item on our FOIA list was pretty straight forward and surely someone keeps a record of it, we thought.  We simply asked for a list of officials receiving assistance from Matt Eddy in the filing of the required Annual Financial Reports.

They failed to provide a single name of a single government official that Mr. Eddy assisted in the filing of those required Annual Financial Reports!  They did give us a list of government agencies he claimed to have visited but some of those don’t know anything about such assistance!  It won’t take much time to follow-up with all those agencies listed as they only provided three pieces of paper for 1 ½ years of work Mr. Eddy has been paid for.

His travel records were interesting to see as well.  He is supposed to “cultivate and maintain relationships” with local government.  No, that’s not political at all!   Those records reflect he received just over $7,300.00 of reimbursements for things like mileage and hotels and traveled a whopping 62 days in 1 ½ years!  The best part of his job?  Getting paid to attend the Illinois State Fair for 7 days and the De Quoin State Fair for 4 days, which is what he claimed on his travel voucher.

The job description outlines he is supposed to have prior customer Service experience yet no evidence of that fulfillment was provided in our FOIA nor was any publication or announcement of the position opening.  So how did Matt fall into such a sweet position of employment?

Matt Eddy, son of former State Representative Roger Eddy has connections.  Daddy for one, who we have been told was planning on running for Lt. Governor if and when Judy Bar Topeka ran for Governor.  Probably a safe assumption that Daddy had something to do with the job creation but right now we can’t prove it.  It appears it was a position created approximately 2-3 years ago of which there were only two people hired until just recently where a third person was hired.

I guess Daddy paying his son over $3,300.00 from his campaign funds in 13 months wasn’t enough to make ends meet.  Turns out the Southern Illinois Republican Caucus and the House Republican Organization provided an additional $34,000.00+ to Matt Eddy over a course of a few years. What for?  Anything from Payroll, cell phone committees, mileage, and even consulting on behalf of John Cavaletto, a former school principal and close friend of Matt’s Daddy and just happens to be a sitting state representative.

As if all this isn’t amazing enough, Matt also works for John Cavaletto in his Salem office.  You may recall we did a story on how Matt helped his Sister-in-law get a college scholarship from his boss, State Rep Cavaletto! Sister-in-law Scholarship .

Drawing  an extra $23,870.89 during his Legislative tenure as a “Policy& Planning Anylist” which then led to his employment with the Comptroller. State Pay History for Matt Eddy

Nothing like keeping things in the family!  Looks like Roger trained him well!  Matt followed in his footsteps in failing to disclose his employment with John Cavaletto on his 2012 Statement of Economic Interest. This is the link to the story on Daddy doing the same thing! Like Father Like Son

Is it any wonder our state is in the condition it’s in financially?  We have exposed so much corruption and illegal activity in our local government it’s enough to make you sick and with only a minor glance at the state level we find what appears to be no end to the nepotism and cronyism in our government bodies.

Thanks to all who provided such great tips that help put this story together!  Each and every one turned out to be spot on!

Keep involved people, you are making a difference! 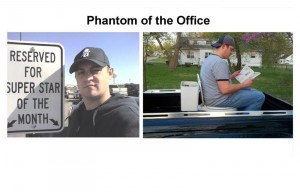