This story is becoming all too common in Paris and Edgar County, as a matter of fact is has become a common occurrence in Richland and Crawford Counties also. This organization has gone completely off the deep end and the sad thing is that they think they can keep getting by with illegally taking peoples dogs.

This story, and more like it that will follow in the next few days, will make you ask this simple question – Why would the Animal Control Board even consider contracting with this particular not-for-profit organization (or anyone associated with it) for care and control of dogs in Edgar County?

If anyone knows of other cases of stolen dogs, please drop us an email!

Remember: Edgar County Animal Shelter – is an entity of the Edgar County Government and DOES NOT operate a webpage  or a facebook page, etc.

There are not-for-profit groups in the county that are trying to blur the lines and present the illusion that they are the Edgar County Animal Shelter when, in fact, they are not.

Keep in mind that the Edgar County Humane Association, The Edgar County Homeless Pets, or any other Humane or Rescue Organization in Paris and Edgar County DOES NOT have the authority step onto your property or to take control of your dog without your permission. They cannot fine you either, that is for the Animal Control Officer to do.

The U.S. Department of Agriculture defines “stealing” as theft of the dog, or using threats or intimidation to take a dog away from the owner.

The Illinois Department of Agriculture, Bureau of Animal Health and Welfare issues licenses and also investigates formal complaints. The phone number to file a formal complaint is 217-524-3006. It must be a first-hand complaint (the owner of the stolen dog) for them to take action.

Now for the first story:

After talking to the owners of these dogs:

A beagle and a basset (with a chip) were taken from a driveway in south easternEdgarCounty, right off of theLower Terre Haute Road, on approx. Aug 29, 2011.

The owners immediately took an ad out in the Terre Haute Tribune (since they live so close toIndiana) and nobody called about the dog. Then, while searching online, they happened to find a craigslist ad (Aug 31) that had the basset up for adoption by Judy  @ 217-465-8727. The pictures are also up on “edgar county homeless pets” facebook page.

Phone call after phone call revealed lie after lie about how the dogs were found, where they were taken to, and the date they were adopted out.

-Val (also works at Wal-Mart) told her the Animal Control Warden scanned it – how could he scan it when it was never taken to the county shelter?

-Mel Elston told her the dog was not scanned for a chip and called the owner an irresponsible pet owner.

-There are many more lies, but I think you get the point by now.

If anyone knows the location of these dogs, please let us know. 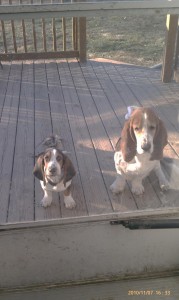 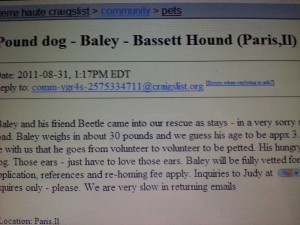 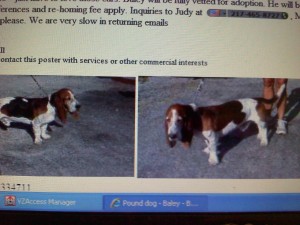 Will come in a few days and is about a litter of Pug puppies stolen out of a fenced yard.