Lies or Truth? You be the Judge!

Emergency Telephone System Board (911 Board)

This topic only covers the 3minute and 50 second portion of the meeting pertaining to pagers.  We will expose the rest of the story as we put it together and you can rest assured, facts don’t lie.  Thanks to Cindy Belt for taking such great minutes back in 1996 but it’s too bad here recently she can’t do the same.

These events stem from about three hours of research pertaining to Kansas FPD never being included in a pager reimbursement, which was done for another agency during the initial implementation of the 911 system.  Kansas and Chrisman were the only two agencies that had already purchased pagers and when the 911 system was implemented they reimbursed Chrisman for their pagers and only paid for a frequency change on the Kansas pagers, which was hardy equal treatment.

At the April 2011 ETSB meting Merle Clark told the Kansas Fire Protection District Trustee and myself that Kansas was offered reimbursement and refused it so that’s the end of it.  Sorry Mr. Clark but the records tell quite a different story.

In less than 4 minutes of a meeting the Chairman of the ETSB (911 Board) Merle Clark, creates quite a story.  Had we not had it on video it would have been just another case of distorting the truth but when you can film them and then cross reference the “record” he speaks of so clearly you can see why it’s time for this person to resign.

What do you do when the Chairman of the ETSB (911 Board) makes statements of facts and claims to have reviewed the same record as the person raising questions and is clearly fabricating responses to questions raised?  Personally I prefer to call it lying because the record in hand (see below) PROVES that what Mr. Clark presented as a response to my questions are in fact in direct conflict with the record he claims he has reviewed.   I don’t think he has reviewed the record as claimed because his answers are not even close to what the record reflects.

I have challenged them to provide such a record supporting his claim and to date nothing is being provided, which speaks volumes.  The minutes he references can be found below and I will take you step by step through the facts to expose yet another set of fabricated claims by the Chairman of the ETSB.

1.      Mr. Clark claims that an ETSB meeting took place in Kansas Town Hall in November of 1996 where the decision pertaining to pagers was made.  That is a fabricated statement!

In the first paragraph of the minutes from November of 1996 please note that the meeting he claims to have taken place in Kansas at the Town Hall did NOT take  place there.  In fact the RECORD reflects that the meeting was in Conference Room A at Paris Community Hospital.

So Mr. Clark, how is that you reviewed the record of November 1996 and there is such an error in your statement?  Reviewed?  I think not.

2.      Mr. Clark Claims that a member of the Kansas Emergency services was at that meeting.  That is fabricated statement!

In the second paragraph you can see for yourself the names of all the people at the meeting.  There is not a single person from the Kansas Emergency services on that list.

Did you miss something in your review Mr. Clark?  Maybe reviewing the record would help better represent the truth!

3.      Mr. Clark claims my suggestion as to the facts of this situation are not accurate at all.  That is whopping fabrication!

Fact: Their own minutes (different date – care to review those Mr. Clark?) state that Chrisman is going to be reimbursed for their pagers.  My request for equal treatment for reimbursement led to this whole investigation of events.

4.      Mr. Clark claims everyone had the same opportunity.  That is a fabricated statement!

When Kansas and Chrisman were the ONLY emergency agencies in the county that already had pagers and the record, their own minutes, state that Chrisman is going to be reimbursed for their pagers that is hardly the same opportunity.

5.      Mr. Clark claims the record reflects the minutes of that meeting.  Praise God!  He told the truth!

When you think about this statement you have to admit it is truly a brilliant     statement that deserves recognition.  Really, think about it.

“the record reflects the minutes of that meeting”

We then agree that the minutes are the record!

The record he represents has NOTHING do with this whole topic.

I challenge the ETSB board to produce ANY record that supports his lies fabrications!

6.      Mr. Clark, in response to my claim we were never offered reimbursement, claims the record doesn’t state that to anybody else in particular.  That takes me to a point where we have to call it a lie. Why?  Because it is. As is the claim he reviewed the record.  If he had he would know it would be pretty stupid to make such a claim when the record reflects something quite different!

This lie simply confirms Mr. Clark has not reviewed the record.   I have in my hand $500.00 to be handed over to Mr. Clark if he can disprove my claim that the record DOES reflect reimbursement is being made to a particular agency, contrary to his claim.  I have the record to support my claim and it’s their minutes.  If he had honestly reviewed them he would know his statement is a lie.  Step up Mr. Clark!  PROVE ME WRONG!

7.      Mr. Clark implies that he has no idea why that paper was not returned to them.  The “paper” he is referencing was a contract between the Emergency Response agencies and the ETSB pertaining to pager purchases.  Another lie fabrication Mr. Clark!

“signed contracts for all emergency agencies are in the possession of the ETSB.”

That is a direct quote from “the record”, their own minutes!  How is it that when   confronted with facts now the implication is that we did not return the agreement to them?  Their own record reflects they are in possession of the referenced signed contracts for ALL emergency agencies.  Their own record disproves his claim, again!

Under the penalty of perjury I hereby swear under oath that Mr. Clark did in fact make the claim during a public meeting of the ETSB that Kansas FPD was offered reimbursement and turned it down.  We also have numerous other witnesses’ that heard Mr. Clark make the statement that Kansas was offered reimbursement and turned it down.  I know all those present at the ETSB meeting heard him also but I don’t know if they will step up and tell the truth, but maybe we will be surprised.

For starters, is Mr. Clark insinuating that something a previous board did cant be fixed?  It sure sounds that way and if that is his position its yet another example of the ignorance in those running our 911 system.

It reminds me of his position on using 911 money to buy christmas presents for dispatchers.  When questioned he doesnt answer the question he simply two-steps it with a claim that other agencies do it and the feedback from the disptatchers is very positive.   Forget the fact that he didnt answer the question.  Instead he, as did others on that board, voted to violate the law and spend ETSB money on Christmas Presents.   This whole topic will be another story soon!

Now, back on topic!   Mr. Clark, Please read the minutes from November of 1996 that you referanced as the record on this and please point us to ANY decision that was made pertaining to pagers.  No such discussion ever took place according to those minutes.

Mr. Clark, in less than 4 minutes, made 9 statements of fact of which 8 of them were either totally fabricated or blatant lies to settle the discussion at the time.  The cover up is always worse!

When I began finding very disturbing patterns with the ETSB and their violation of state statute in regards to what they are spending money on I went to the appointing authority to ask a question.  The response will go down in history!

Jim Keller, County Board Chairman made the statement that we don’t need any oversight on our 911 board because he has “Full Faith and Trust” in Merle Clark, the 911 board Chairman.

If telling 8 lies in less than 4 minutes is what we get for that Full Faith and Trust then I think it’s time to demand the resignation of  both our County Board Chairman and the ETSB Chairman to include anyone else that thinks this is no big deal.

We deserve the truth from our elected and appointed officials and when this type of blatant disregard for the truth takes place it only cause’s further decay in our system of government.

Mr. Clark, Mr. Keller, I hereby request you do the right thing and resign from your positions so that this county can work towards establishing a new group of people that can be trusted to at least be honest with the people and ensure those appointed are held accountable to their actions, or lack of! 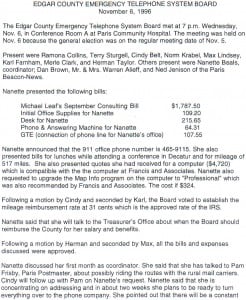 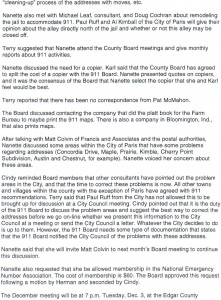 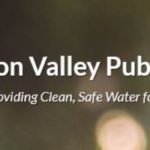 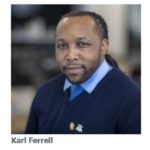