The Sangamon Valley Public Water District issued a press release dated June 13, 2022, that by all indications, appears to constitute both electioneering with public resources and in violation of the state ethics act.

As covered by WCIA Channel 3, “The board chairman, Meghan Hennesey, sat on the petition for more than a month.” “A couple hours before having to appear in court Hennesy officially filed the petition, avoiding any continued court appearances.”

Now that the question for electing trustees is on the ballot, a Vote Yes flyer hit the mailboxes within the past week and this is where the story gets interesting. 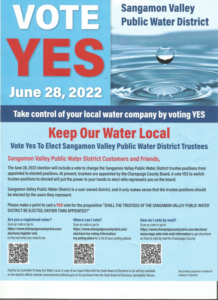 According to the SVPWD press release, “SVPWD strongly believes that APPOINTING board members is in the best interest of the District.” (Link updated to the actual document since the SVPWD changed their press release after our publication)

Public bodies are not allowed to use public resources in support of or in opposition to a referendum on the ballot.  In fact, the law outlines that doing so is a Class B Misdemeanor for the first violation, which means the legislature felt this was serious enough to find such actions, criminal.

Considering there is no meeting notice published on their website since the flyer was circulated and the date of their press release, we must ask, who is responsible for the drafting and publishing of this so-called SVPWD belief?

Anyone reading the press release can clearly see it was created as a campaign counterpoint to the flyer in question and by all indications from an attorney we have spoken with, it violates our state election laws regarding electioneering.  We would urge citizens of the district to file a formal complaint to the State Board of Elections on the matter.

In reviewing the state ethics act, it appears the SVPWD has also violated portions of the ethics act as well.

The definitions of Prohibited political activity appear to have at least one and possibly two that would apply to this press release.

We have submitted numerous Freedom of Information Act requests to the SVPWD and will update as this investigation moves forward as we have already found a laundry list of problems that need to be exposed.