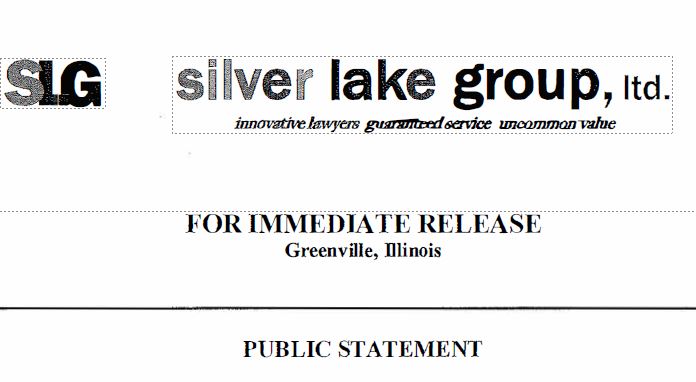 The 700+ parents who have brought legal action against their local school districts, as well as the Governor, the Illinois Department of Public Health and the Illinois State Board of Education, by and through, Thomas De Vore, Attorney at Law, provide the following statement:

For over 21 months, parents have patiently tolerated overreach by Governor J.B. Pritzker and his administrative agents, while praying for the legislative branch of government, the people's voice, to step forward and defend their God-given rights of due process ensconced in the U.S. Constitution, Illinois Constitution and applicable Illinois statutes.

As Governor J.B. Pritzker has continuously issued his one-man edicts, mandates, orders, and one size fits all guidance, all lacking any public discourse in which the people or their elected representatives could participate, the emotional health of children has suffered immensely. As the days and months passed, the goal posts continually moved further down the field, but one constant remained, people's rights of due process under the law were shredded at every turn. The constant promise of a better tomorrow, if we all just do our part to 'flatten the curve', now rings hollow as children endure their third school year of capricious executive dictates, none of which have been deliberated upon and made into law by the legislature.

Parents will no longer sit idly by while Governor J.B. Pritzker rules by executive fiat, to say nothing of the simple fact that lawful requests for the executive to share the 'facts and science' on which his edicts are based go unanswered. This country was founded upon three co­equal branches of government and the executive cannot rule like a king until he arbitrarily sees fit to relinquish control.

For these reasons, more than 700 Illinois parents brought legal action on behalf of their children, carrying out their parental duty to protect their children, and, indeed, all children of this State, from further transgressions by the executive branch of government. It's far past time we restore the system of self-governance upon which this nation was founded. If the legislature won't act to reign in these abuses, our only recourse to seek redress is the judiciary. Our children deserve no less.