A recent Shelby County Board meeting resulted in more division of the board members, to the point of childish name-calling to those who dare vote in a manner consistent with the law rather than as opined by the State’s Attorney.

Nichole Kroncke, the Shelby County State’s Attorney provided her legal opinion regarding the potential leasing of county farm ground, and by all indications, it appears she is advocating for a particular outcome rather than providing factual information. In addition to providing her opinion, she made a statement of fact that is not supported by the actual record.

Specifically, Kroncke stated: “The Illinois Legislature in this statute defined the public purpose as generating revenue.”

The video below is of the entire farm lease discussion but it starts with the specific statement that is unsupported by the actual records.

Not only was her statement regarding the legislature defining public purpose not true, but her analysis fails when compared to the Attorney General’s analysis on leasing property for private purposes in this opinion.

There was no definition of public purpose found in the legislative debate as she claimed, none.  Please read the floor transcript to see for yourself. What you will find is the truth, the term “public purpose” was never mentioned, nor was any determination made regarding public purpose. What was mentioned by a single senator was the words “private interests” and from that, Kroncke crafted an opinion in what appears to be an effort to justify leasing public property to a private farmer.

We reached out to her to get clarification due to our research pointing to her statement being false. We are confident that if the board follows this advice there will be a lawsuit brought against the county. As of this publication, she has not responded.

We agree a lease could be entered with a private entity however there must be an identifiable public purpose.  For example, the law she is pointing to was created based on a request from Kankakee County.  We obtained the Kankakee County Lease agreement for office space that was tied to the legislative record linked above and let’s just say in the future the State’s Attorney should gather all the information before casting her unwritten opinion on matters.

As can be read in the actual Kankakee County Lease agreement, the issue of public purpose was clearly identified and documented.  While the private entity in question is no longer leasing space, we understand they were a private non-profit association that was partially funded by the State of Illinois Department of Commerce and Community Affairs.  Kankakee County Labor/Management Association had as its purpose the enhancement of cooperation between management and labor organizations within the County. As anyone reading the lease can see, it’s a far cry different than leasing to a private farmer.

Nowhere in the law in question is there language that permits the lease of public property for a private purpose. Nor is there any language in the legislative discussion making ANY determination regarding a lease for revenue having a public purpose as she claimed.

A private farmer makes money off the land, the public is not served by his profiting. If the private farmer was raising food to supply a food pantry to help the needy, that would be different.

The legislator’s comments during a floor debate of a bill are not a representation of the legislator’s intent as Krnocke has insinuated, especially when there was only a single Senator that provided his opinion on the matter when answering a question.  Further research on the topic of “legislative intent” has been a valuable lesson for our reporting as over the years we too have looked at debate language. What we have found, as we stated in this article, “The cardinal rule of statutory construction is to ascertain and give effect to the intent of the legislature. People v. Ward, 215 Ill. 2d 317, 324 (2005). The best evidence of legislative intent is the language of the statute, and when possible, the court should interpret the language of a statute according to its plain and ordinary meaning. In re D.F., 208 Ill. 2d 223, 229 (2003).”

Statutory construction may not have been of particular interest to some law students, however, it is the bedrock for proper legal analysis.  From the words found in Antonin Scalia’s book, “A Matter of Interpretation”:

“A government of laws, not of men, means that the unexpressed intent of legislators must not bind citizens. Laws mean what they actually say, not what legislators intended them to say but did not write into the law’s text for anyone (and everyone so moved) to read.”– Antonin Scalia – A Matter if Interpretation

If Kroncke wishes to focus on legislative intent, one only needs to read the actual lease to understand the County’s goal being to lease to a private entity that served a public purpose.  Her analysis stopped short of getting the full scope of what was really going on.  Either by design or laziness, the fact remains, there was no legislative definition established and the actual lease, in that case, had a public purpose, unlike the one she is pushing related to the lease of farm ground. The law on the books, just like in the past, makes no mention of allowing the lease for a private purpose.

We believe her position also conflicts with case law and what is known as the Public Purpose Doctrine. “Illinois Courts have developed the Public Purpose Doctrine to determine whether a given transaction accomplishes a proper governmental function”. While not directly on point to the situation in Shelby County, the Appellate Court of Illinois SIXTH DIVISION included language in a 2014 ruling that can easily be applied.

“We believe the crucial test is whether the attempted use of the municipal property subserves the public interest and benefits a private individual or corporation only incidentally. If the private benefits are purely incidental to the public purposes of the act, then [the public-purpose provision] is not violated.” Id. at 355.Indep. Voters of Ill. Indep. Precint Org. v. Ahmad

Private farming of County property does not serve any governmental function found in the Counties Code outside of the operation of a poor farm.  Considering the benefactor of the profits are to a single farmer, not the general public, the public purpose has not been met.

At this point, those who keep trying to justify leasing farm ground to a private farmer are saying the AG opinion was prior to the new section of the county code that permits leasing of property. (55 ILCS 5/5-1049.2).  Leasing authority is nothing new to the county code, nor does the timing of the law vs. past opinions make a difference when proper statutory construction is applied.  The new law, just like the one referenced by the AG, does not authorize counties to lease their property for private purposes.  In fact, the word private does not appear anywhere in the section being used as the justification for the lease.

An example of the legal use of county property by a private entity can be found in 55 ILCS 5/5-26004 regarding the use of County Memorial buildings. “Boys’ clubs, associations of commerce, civic improvement and health bodies, farm bureaus and other similar non-partisan and non-sectarian organizations, not organized for profit, shall be deemed within the meaning of the words “public or civic purposes,” and available space in such memorial buildings may be rented or leased at a reasonable rental to any such organization.”

Leasing to a private entity for their own profit does not equate to a public purpose.

We stand firm in our understanding of the law and past opinions as it relates to county government leasing farm ground, they can’t do it unless there is a clear public purpose.

We are saddened to see yet another elected official make statements that clearly sway votes when such a statement was not found in the very record she points to in her attempted justification to lease property to a private farmer. 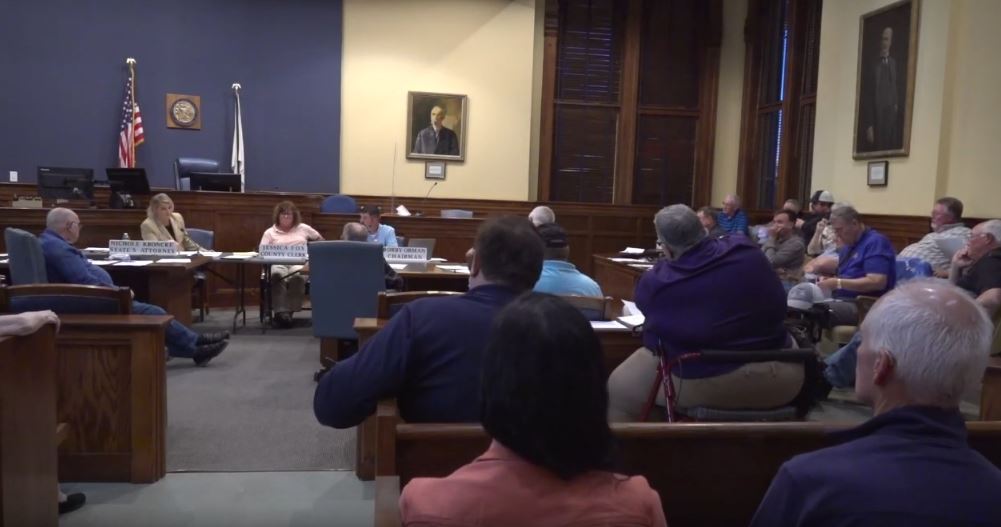