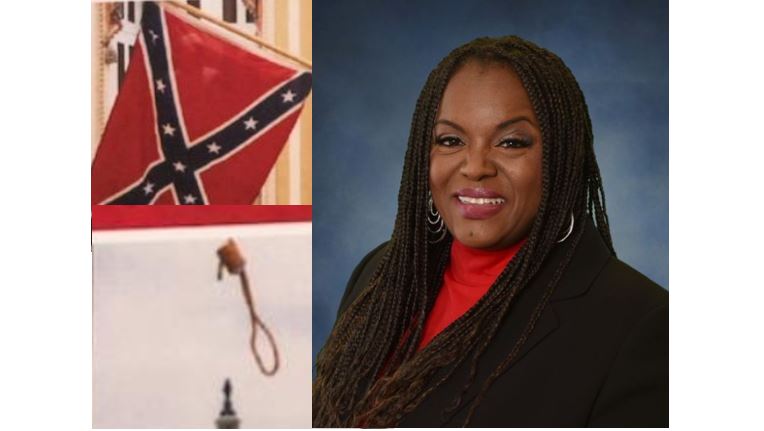 Edit for clarity from a commenter: "Allegra Marketing-Print-Mail of ROMEOVILLE is NOT ‘Allegra Publishing’ and is an INDIVIDUALLY OWNED FRANCHISE. They are also not affiliated with any of the other Allegra printing operations in the area.  I ask that you do not lump all the Allegra franchises into this. My local Allegra does not support this kind of hate-mongering and racism."

Earlier in February, a group calling itself “Citizens Against Benford” sent a mailer out to DuPage Township voters which included inflammatory language and an image of the Confederate Flag in proximity to DuPage Township Supervisor Candidate Alyssia Benford, a Black Woman and on the Republican Township Slate of Candidates.

We wrote about that flyer in February (here), and mentioned this group had not registered with the State Board of Elections as of that publication, but appeared to be spending money – we just don’t know how much yet.

At that time, we reached out to Candidate Gary Marschke asking if he endorsed the use of these images and the inflammatory text by apparent supporters of his since they posted the flyer next to positive comments about him, he did not respond.

Fast forward to yesterday, when a new flyer was sent to DuPage Township voters, only this time it included images of the Confederate Flag next to Benford, and a noose below that (see front and back of new flyer). It was sent by the same anonymous group named “Citizens Against Benford” which is still not registered with the Illinois State Board of Elections.

A Freedom of Information Act request to the United States Postal Service revealed that both of those mailers, a mailer sent by a Florida-based company, and a mailer sent by Candidate Felix George, who used the same business account for the postage, were sent from a company named “Spell It With Color, Inc.” also known as Allegra Printing and Imaging.

“Spell It With Color, Inc.” is registered with the Illinois Secretary of State to conduct business in Illinois, with their business address as 1340 Enterprise Drive, Romeoville, Illinois 60446, and a business phone number of 630-326-4500.

“Allegra Printing and Imaging” was an assumed name of “Spell It With Color”, but is reported to the Secretary of State as “INACTIVE”.

The business’s officers are listed as THOMAS J. WILHELM and ASHLEY E. WILHELM with their address reported to the Secretary of State as 1644 Swallow Street, Naperville, Illinois 60565.

Campaigns that have paid Allegra for services in the current or past election cycles include:

A Campaign who has received donations from Allegra in the current or past election cycles:

The Will County Republican Chairman addressed the flyer with the following comment:

“There is an adage, "Politics makes strange bedfellows."  The more I become involved, the more I find truth in that statement and what is wrong with Illinois Politics.  The strange entanglement of relationships never ceases to amaze me.  I recall my shock of former indicted State Senator Martin Sandoval being supported by his good friend, former Republican Chair Pat Brady even when faced with overwhelming corruption charges. I was flabbergasted when former U.S. Senator Mark Kirk turned his back on State Senator Jim Oberweis to support his good friend, corrupt U.S. Senator Dick Durbin, in that race. It would seem "friendships" prioritize these career politicians over what is best for the people.  Then I remembered another old saying, "Follow the money."

So we are doing just that.  We found a bunch of no-bid contracts totaling tens of thousands of dollars to a company called Allegra Marketing Print Mail in Romeoville.  In return, Allegra would make a bunch of "In-Kind contributions" to several corrupt politicians.  Allegra Marketing is now sending out racist, inflammatory lies about the one politician in DuPage Township that has genuinely been fighting corruption.  Trustee Alyssia Benford and candidate for DuPage Supervisor, has had an onslaught of vicious attack ads mailed to Republicans from Allegra Marketing in hopes of discouraging residents from voting for her authentic leadership.  Trustee Benford launched an audit into numerous erroneous line items by former Supervisor Bill Mayer, who resigned in disgrace.  Some of those violations were several no-bid contracts to Allegra Marketing. These are costs being charged to the taxpayers of DuPage Township.

So it did not surprise me to see the same company supporting the current Supervisor, Felix George. He failed to put together a slate of Republicans or even show up to the Republican Caucus for the DuPage Township election.  Now we understand why.  Felix George is throwing a tantrum with the help of Democrats to continue to over-tax DuPage Township residents.  The Republican Caucus did not elect George to continue his declining leadership.  Republicans appointed Supervisor George to correct the failures of Bill Mayer. Instead, he seems to be picking up right where Mayer ended.  Those assisting George are in it for themselves and not the residents.  It is time out for this nonsense of greed, corruption, and the outright support of ineptitude over friendship and money.  There must be a reckoning to set Illinois and its residents back on the right track; that starts with breaking up these monopolies that are ruining Illinois politics and forcing our friends and families to flee this once great state.”

We stand against the use of these hate symbols, especially in political campaign advertising, and cannot understand why any company would consent to printing and mailing flyers such as these to local voters.

A new "local news" entity (from Florida) headed up by Bonnie Kurowski (failed candidate for Bolingbrook Mayor - now living in Florida) proudly displayed the previous flyer in a comment in favor of Benford's opponent, Gary Marschke, alongside his photo (see it here) and he has not responded to our questions on whether or not he supports the use of his campaign image alongside the previous racist postcard (that alone should tell you about his character). Incidentally, this "new" entity, from Florida, also posted an unflattering photo of Benford with the word "shit" under it, another one with cockroaches and a photo of Benford, and even wrote an article calling Benford the "wicked witch of the west" and hoping that a house would fall on her.

Kurowski's website and Felix George also used Allegra Publishing to mail their flyers out (same mailing permit used) - we anxiously await their comments on this most recent racist hate flyer, if they will encourage Allegra to reveal who paid for its mailing, and if they will continue doing business with a company who takes jobs like this one.

We attempted several times to reach anyone at Allegra Publishing, but the phone message said they were not open today. We will try again on Monday.