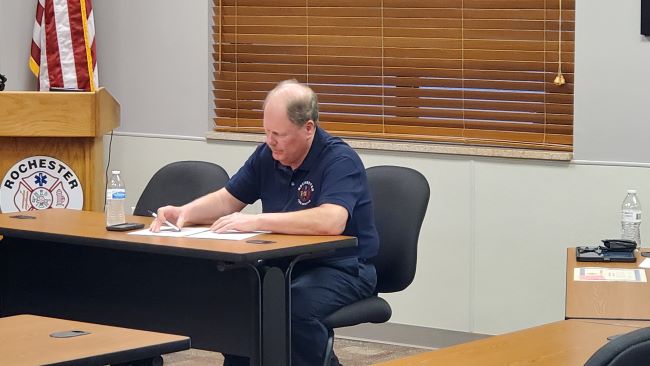 The Rochester Fire Protection District Trustees and current Rochester FPD Chief John Archer have been ignoring the law and the District's  internal purchasing policy for years.

Upon being contacted for help in fixing what was believed to be improper purchasing by members of the Rochester Fire Protection District we began our evidence gathering and confirmed numerous alleged violations of law.  After meeting with one of the Trustees who was attempting to fix this matter, and attended a meeting to address some of the concerns, it was clear the other trustees had little interest in addressing the issue in a public meeting.

The pushback led to a formal criminal complaint being filed by a lone Trustee of the Rochester Fire Protection District who recognized something terribly wrong was going on. Marty Fairchild provided the Illinois State Police with the complaint after it was clear the Trustees were more interested in attacking him for questioning the business practice of Chief John Archer doing private business with the District. We understand Fairchild raised concerns about the potential conflicts of interest when Archer was appointed as Chief and was basically assured there was no problem. After seeing the large volume of invoices he followed his gut and began investigating the law and found what he had been told was not accurate, and even discovered certain communications from the Fire District's Attorney on the matter were kept from him.

The Rochester FPD District's own attorney warned them in writing of what would constitute a felony action, not once, but three times now as it relates to John Archer and his interest in AEC Fire Equipment Company and doing business with the Rochester Fire Department.  Once in May of 2018, again in November of 2019,  then a third notification, March 30, 2020, came after these issues were brought to light by Trustee Fairchild.   This is an important fact in light of the Board President's comments about this matter in the May minutes.

"President Riggs pointed out that it was never a “criminal” intent and that over the years A.E.C has gone out of their way to bring good service to the department by demonstrating and allowing the members to use different types of equipment before purchase. A.E.C Fire Safety has provided a tremendous service to the department and it is with great regret that the law does not allow us to continue that relationship with such a small town business to work in our favor. In the long run, it will cost the department concededly more to obtain the service and equipment previously provided by A.E.C Fire Safety"

When a Board President is twice advised such self-dealing has criminal consequences and it continues, how is that not reflective of criminal intent?

As was pointed out by the attorney, according to the Fire Protection District Act, an employee or trustee of the District is limited in the services they can provide to the District, and violations of this provision state they are guilty of a Class 4 Felony.

(70 ILCS 705/4) (from Ch. 127 1/2, par. 24)
Sec. 4. Trustees; conflict of interest; violations
(c) In addition to the above exemption, any trustee or employee may provide materials, merchandise, property, services or labor if:
A.the award of the contract is approved by a majority vote of the board of trustees of the fire protection district provided that any such interested member shall abstain from voting; and
C. the amount of the contract does not exceed $1000;
and
D. the award of the contract would not cause the aggregate amount of all such contracts so awarded to the same person, firm, association, partnership, corporation, or cooperative association in the same fiscal year to exceed $2000;
E. such interested member publicly discloses the nature and extent of his interest prior to or during deliberations concerning the proposed award of the contract;
and such interested member abstains from voting on the award of the contract, though he shall be considered present for the purposes of establishing a quorum.
(e) Any officer or employee who violates this Section is guilty of a Class 4 felony and in addition, thereto any office held by such person so convicted shall become vacant and shall be so declared as part of the judgment of the court.

As if total disregard for the law is not enough, their own purchasing policy has been regularly violated.

Most would agree that an FPD making a purchase from a company owned by their Fire Chief would constitute a "special relationship".  Bidding obligations were not followed as required by law and their own policy.

In fact, a future article will expose the $500,000 plus Fire Truck purchase made in violation of their own bidding policy of requiring at least two bidders.

During Archer's time with Rochester FPD,  his company, AEC, issued invoices 15 times that exceeded the $1,000.00 limit.  During that same time frame, the $2,000.00 aggregate annual limit was violated every year since the law was in put in place in 2015.

UPDATED - 1 Invoice had a data entry error that is corrected.

We understand the criminal investigation has been turned over to the Sangamon County State's Attorney for a determination to made regarding prosecution. Considering the Fire District's Attorney warned them no less than three times on the potential criminality of such actions we would hope criminal charges are brought forward against those who had knowledge of those warnings, and against the Chief who has clearly been self-dealing for years.

UPDATE: WAND's I-TEAM, with Doug Wolfe, reported on this last night (click HERE for their video).