It appears that Pecatonica Township Attorney John M. Nelson (Rockford) is attempting to influence a court case by sending a letter to the Winnebago County State’s Attorney. This letter contained very little truth, with lots of embellishments and outright false statements.

We will break this letter down, paragraph by paragraph to expose Nelson’s unprofessional conduct.

“Please note the enclosed correspondence I have received from Attorney Denise M. Ambroziak. She is closely associated with the Edgar County Watchdog – group of largely professional troublemakers who have taken an interest in townships across the state. “

The correspondence was a letter indicating that Pecatonica Township lacked legal authority, short of a court order, to prohibit anyone from attending a township meeting, and that Rogene Hamilton was attending the next meeting, and that any attempt at arrest would be met with legal action against the township.

Attorney Denise Ambroziak has filed several FOIA lawsuits on our behalf – if that makes her “closely associated with” us, then so be it – but it has no bearing on anything happening in Pecatonica Township.

Additionally, we (ECWd) are not “professional troublemakers” as Nelson indicates. Insisting on compliance with state law does not equal troublemaking. Yes, we have taken an interest in townships, but also an interest in all local governments in this state. This is not the first time Nelson has fabricated claims about us. He is probably still upset with our article about him in Algonquin Township when he opined about an illegal settlement for the clerk.

“We have had nothing but trouble from Ms. Hamilton, a Pecatonica gadfly, in her attendance at our public meetings. She somehow believes it is her “right” to interrupt the Pecatonica Township meetings, lecture and question the Supervisor and board members, out of order. She always speaks in public comment and usually has completely unfounded accusations against the Supervisor. “

It is not “our” meeting, as Nelson indicates, implying the township’s meeting, rather it is a meeting of the township board of trustees and is a “public” meeting. Hamilton does have a “right” – granted under the Open Meetings Act – to lecture and question the Supervisor and board members, whether it be to accuse them of things or praising them for their work. We suggest Nelson take a First Amendment class to refresh his knowledge.

“This is the second time your office has dismissed a criminal case against the troublemakers that Ms. Hamilton has brought to the Pecatonica Township meetings. Ed Smith, who laid his hands on me, had his case dismissed. My understanding is that his FBI rap sheet shows that he has a record by the way.”

No, this is the third time criminal charges have been dismissed – maybe it is because the township had no authority to arrest or ban people from attending public meetings? Most educated people would take the hint, but not Nelson, he keeps throwing out lies to instigate the process.

According to Ed Smith, he did not “laid his hands on me” as Nelson indicated – I watched that video (which has now been removed from YouTube) and it was simply that Smith touched his jacket during public comment (he was standing next to Nelson while speaking). His case was dismissed because the police officers used excessive force and the township lacked authority to do what they did (we are working on obtaining the signed letter to attesting to this).

An attorney using the phrase “FBI rap sheet” isn’t familiar with the Constitution’s of either the State of Illinois or of the United States of America. How would Nelson know anything about an “FBI rap sheet” unless he illegally obtained knowledge of it? Not to mention that a “RAP sheet” has nothing to do with actual convictions – if there even is a “RAP sheet”.  Convictions are what is required to “have a record.”

“The Chief of Police of Pecatonica Township took him into custody thereafter. He faked .. police brutality” by hitting his bead against the wall of the township building. He also faked tripping over the door jam on his way out the door. This was all duly recorded on other attendees’ cell phones. I am concerned for the law abiding citizens attending the Pecatonica Township meeting including myself. “

Yes, he was taken into custody, but the police used excessive force (which is why the charges were dropped). I saw the video, Nelson has no way of proving whether Smith faked police brutality or not, he was allegedly forced out the door which is how his head hit the wall, and how he tripped on the way out – from being forced out of the building.

“I was informed that there is case law that prohibits the Township from banning miscreants from the public meetings and enforcing that ban via a criminal charge of trespass. I would hope that those case names and citations could be sent to my office so that I could review them accordingly.“

In this paragraph, Nelson essentially says “I am too lazy to do the appropriate research myself and want you to research it for me and send me the results.”

“Thank you for your cooperation in this matter. We have problems at Pecatonica Township holding orderly meetings. Three members of the Board of Trustees and the Township Supervisor are on the other side of seventy {70). The reason I am their township attorney is that Attorney Rodney Grimes quit after being accosted by Ms. Hamilton during an on-going meeting.“

What Nelson should have said in this paragraph was that the township has a problem complying with the Open Meetings Act and every attempt they have made to eliminate or subvert the requirement of the right to speak has failed miserably – and will continue to fail.

He lied about Hamilton “accosting” the former attorney. She merely exercised her right to speak her mind, which does not meet the definition of “accosting”.

Maybe those referenced in the letter should sue Nelson considering his publication is not in the course of making a police report or as a precursor to litigation. 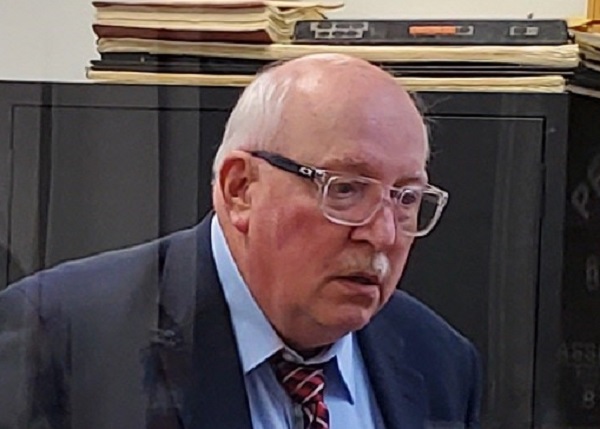