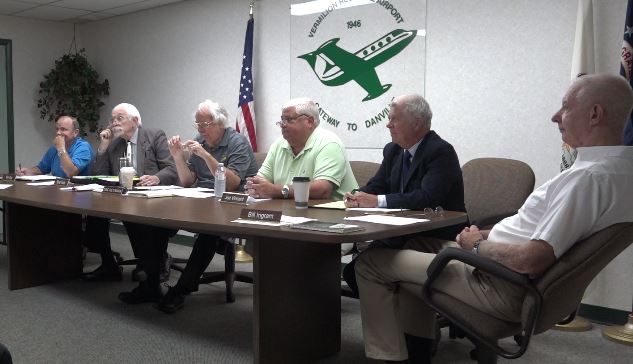 During the July 17, 2018, Vermilion County Airport Authority Board of Commissioners meeting, the commissioners were laughing at IDOT's slow-walking of their clear, willful, and intentional violations of state law, which are felonies if convicted.

The Airport Authority is then required to hold a hearing in which the Commissioner(s) are required to show cause why they should not be removed from office.

Additionally, in the case of Steve Foster, the Public Officer Prohibited Activities Act comes into play where violations of that act are felonies. I doubt the legislature would place violations of the act as felonious if the violators could simply laugh it off, and have their attorney laughing it off also.

During Public Comment, I recited parts of the Airport Authorities Act and Public Officer Prohibited Activities Act (below):

Is it really that difficult to understand that an alderman of a city cannot be appointed to the airport commission? Why is it this is taking so long, and why is it that neither IDOT nor the Airport Authority and its legal counsel can read and comprehend the half-sentence prohibiting Steve Foster from serving on the commission?

Sec. 5. Qualifications of commissioners and removal from office. No person shall be appointed to the Board of Commissioners of any Airport Authority who has any financial interest in the establishment or continued existence thereof or who is a member of the governing body or an officer or employee of a municipality, a county, or any other unit of local government, or an elected official of State or federal government, except when the authority is wholly located within a single county with a population of less than 40,000, an individual employed by a local school district may serve as a commissioner.

Sec. 2. No alderman of any city, or member of the board of trustees of any village, during the term of office for which he or she is elected, may accept, be appointed to, or hold any office by the appointment of the mayor or president of the board of trustees, unless the alderman or board member is granted a leave of absence from such office, or unless he or she first resigns from the office of alderman or member of the board of trustees, or unless the holding of another office is authorized by law. The alderman or board member may, however, serve as a volunteer fireman and receive compensation for that service. The alderman may also serve as a commissioner of the Beardstown Regional Flood Prevention District board. Any appointment in violation of this Section is void. Nothing in this Act shall be construed to prohibit an elected municipal official from holding elected office in another unit of local government as long as there is no contractual relationship between the municipality and the other unit of local government. This amendatory Act of 1995 is declarative of existing law and is not a new enactment.
(Source: P.A. 97-309, eff. 8-11-11.)

Sec. 4. Any alderman, member of a board of trustees, supervisor or county commissioner, or other person holding any office, either by election or appointment under the laws or constitution of this state, who violates any provision of the preceding sections, is guilty of a Class 4 felony and in addition thereto, any office or official position held by any person so convicted shall become vacant, and shall be so declared as part of the judgment of court.

It is also clear that Commissioner Tom Day is part of the problem by listening to his comments while I was attempting to address the board.

It is unfortunate these commissioners and their attorney must act like children when their hands get caught in the cookie jar, but it is what it is.