It is amazing to see how fast a person goes from insinuations he would have to start out as a 5-Star General if he went into the military, to a sniveling has been, claiming his human rights have been violated after he is exposed and terminated.    We first covered his Human Rights complaint in this story, which was dismissed.  He still has time to appeal but there is more to the story that needs to be shared.

Reading the most recent information provided by the Illinois Department of Human Rights it became clear that games were being played with the wording of his discrimination claims, and we pointed out several of those in the previous article.  One that is truly laughable is the following from exhibit 1, page 35.

Allegation: On or about April 16, 2015, I advised Erin Birt, then Chairman of the College of DuPage Board of Trustees, about my Intention to take leave. She did not deny my request.

The response from COD is exactly what we pointed out in our first article.  It was just a matter of applying common sense to Breuder’s claim.  In addition, the following exchange on the same page also confirms you can’t take leave until it is first approved, just as we stated previously.

Allegation: Several months later, on August 3, 2015, I received a letter dated July 30, 2015, from Katharine Hamilton, the current Chairman of the College of DuPage Board of Trustees, “denying” my use of Respite Leave during my medical leave.  Actually, my Respite Leave began on July 29, 2015.

Response: COD admits that the letter was sent to Breuder by Chairman Hamilton. The remaining allegations of this Paragraph are legal conclusions that require no response. Responding further, COD avers that Respite Leave could not “begin” until it was approved, which it was not.

Breduer claims he has been retaliated against on the basis of his disabilities- anxiety and severe depression, which were diagnosed in March 2015.  He also claims those disabilities were brought on by the hostile actions of COD’s Board of Trustees.

One can only wonder how the previous COD Board of Trustees are responsible for his anxiety and depression.  How does illegally voting in closed session to basically pad Breuder’s pocket and then vote to give him a Three Quarter of a Million Dollar payout cause anxiety and severe depression?

I suspect if the truth were known, the “5-Star General” who got kicked out of his kingdom after being exposed for all the illegal spending taking place at that college is what lead to the depression.  The anxiety, we suspect, comes from not knowing when the FBI/US Attorneys/State’s Attorney/US Department of Education are going to start prosecuting those responsible for all the illegal activity that took place at the College of DuPage.

You can read the entire case file provided by the Illinois Department of Human Rights below.  It is in two parts. 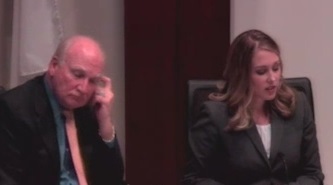