Traci Ellis, former Assistant Director of Affirmative Action Equity Compliance-Northern Illinois University (NIU) and current U46 Board member, went on what appeared to be a defensive tantrum that started with telling the board and the public "Let's put the naked monkey on the table".   We are still trying to figure out exactly what she meant as to date we have yet to find such a phrase even with the power of Google.  Ellis claimed this was what a pastor said at a church she attended.

Her tantrum began when it came time to vote on "allowing" U46 Board member Jeannette Ward to listen to a specific closed session recording from 2014.  The board has taken steps to restrict such access in the past and only after the legal action that included Ward obtaining a temporary restraining order on the board's attempt to destroy the record, and the legislature passing a law that makes it even clearer than before, you can't restrict elected officials access to the records, we now see continued tactics to control the release of the record.

Other statements by Ellis during the board meeting that point to a person who does not want this recording out are:

We can only speculate why she rambled on about this issue being about her because the issue is about a duly elected official having access to records of the public body they are a member of.  She clearly has made this matter about herself by her actions, both to restrict access with a policy change when the request to listen was first made to now insinuating allowing this tape to be listened to will chill future board evaluations.  If that is the case, what on earth did Ellis really say in that closed session that has her so concerned? To ramble on about the closed session meeting being a board evaluation and that everything said in that meeting was within the rules of such a meeting is nothing more than deflection.

Ellis claims she wants the Attorney General to get involved and investigate this particular meeting.  How convenient that is not legally possible at this point because of the amount of time that has passed since that meeting in question. Nothing like an attorney, which Ellis is, to suggest an AG investigation as a means to imply she has nothing to hide all while knowing that is not an option.

What is an option, is a criminal complaint to the local State's Attorney for his review and determination.  The DuPage County State's Attorney just recently did a very similar investigation and prosecuted the Open Meetings Act violation by the former COD Board, who insisted they did nothing wrong, much like we hear from Ellis.

We challenge her to file a complaint with the State's Attorney and have it reviewed.  Or better yet, since she has said she can't be embarrassed by what was said in that meeting, release the tape to the public.  Let the public hear what "board evaluation" took place.  That would help the voters to better know what they are getting when they cast their votes during the next election.  Besides, board evaluations do not have to be done in closed session and the fact they chose to do them behind closed doors points to a lack of transparency.

Another food for thought for this clearly concerned board member, a board evaluation recording should be the one thing every new board member  should listen to.  There is no better way to learn how to be a better board member than to learn from other's experience.  Listening to past evaluations can point to problem areas of the past and learning about them leads to avoiding the same problems in the future.

Sadly for Ellis, she thinks the people are stupid enough to believe she has nothing to hide.  If that is the case, Ms. Ellis, "let's put the naked monkey on the table", just as you said should be done.  I don't think she has the courage to make this record public as she knows her comments during that meeting will, in fact, come back to haunt her.

The painful attempt to defelct from the real issue can be viewed below. 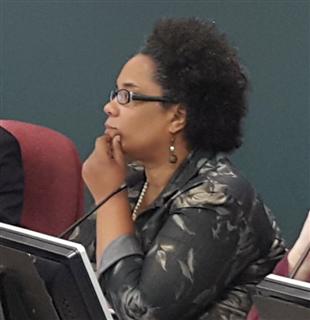