We left off with the Board Policies that directly affected obligations of Officers of the Board of Trustees. Now we must look at how these Board policies work together.  The officers are selected at an annual organizational meeting.  Those Board officers serve until the next annual meeting, with listed exceptions; and if the Board wants to remove an officer before the next annual organizational meeting, which is what Robbins Schwartz was advising, you need a majority vote of the entire Board.   A 3-3 split won’t cut it.

This alone means that notwithstanding the chairman’s resignation, 3 Trustees don’t have the right to kick out all of the other officers by any means, let alone by calling an organizational meeting.  They all serve until the next organizational meeting unless a majority vote of the Board both (a) votes to remove; and (b) finds that this removal is in the Board’s best interests.

Thus, even with a 3-3 Board split, the COD Board could not kick out the existing Vice-Chairman from her role, because there is no majority vote possible to remove.  This preserves the regular order of things, ensuring that in precisely the situation here with a 3-3 Board, there is an officer (Vice-Chairman) who can continue to serve as chairman in the chairman’s absence.

But even if that weren’t enough, Robbins Schwartz failed to recognize the COD Board had adopted Roberts Rules of Order when the reformers took over in April 2015.  While the attorney was busy drafting and providing his opinion to support the position desired by Dianne McGuire and the rest of the Breuder-era Trustees and Joe Collins, we simply turned to the adopted policy of the board to follow Robert’s Rules.  We found that the legal advice given was simply wrong, which tends to be the case when attorneys draft opinions based on desired outcomes instead of statutory construction, existing Board Policy, and governing rules.

Roberts Rules of Order – 11th Ed. 575 – “If the bylaws (known as policies) are silent as to the method of filling a vacancy in the specific case of the presidency(chair), the vice president (vice-Chair) or first vice president automatically becomes president for the remainder of the term.”  In this case, the term is until the next annual organizational meeting consistent with the Board Policies.

What did the managing partner of Robbins Schwartz say in his opinion letter?

“the Act does not specifically address how the Board is to proceed with the selection of a new Chair upon the resignation of the Chair.”

If they believe what they wrote, then as Roberts Rules states, the vice president (vice-Chair) or first vice president automatically becomes president for the remainder of the term.”  This is based on Robbins own opinion that the Community College Act does not address how to proceed (silence) with the selection of a new Chair upon a resignation.

“Notwithstanding the absence of either statutory or policy provisions on the replacement of a resigned chair, the only logical conclusion is that the Board must meet and conduct an election of a new chair.

When COD adopted Roberts Rules of Order, that was a policy provision and those specific rules designate that the Vice Chair automatically becomes Chair for the remainder of the term.

What about the suggestion that the Board was required to have a new organizational meeting?

Here again, Robert’s Rules states, “The individual replacement of persons who may occasionally vacate board membership” is something that “does not have the effect of requiring new officers or closing out a board’s business year,” which is the purpose of an organizational meeting.  Robert’s Rules 11th Ed. 489.

“We believe that the President of the College has the authority to call for a meeting to facilitate the election of officers and to set the agenda for such”.

Now, perhaps Perkoski of Robbins Schwartz wanted to give this opinion to just the interim President alone, and not the entire Board (who would then have the opportunity to rebut his obvious mistakes).   Perhaps he was sending this to help back up the Breuder-era Trustees in their quest to regain control over the Board—and conveniently return the law firm he manages to business they lost when the Reform Board took over.  Perhaps he was concerned that Collins, faced with actual Board counsel Tim Elliott, vs. fired counsel, might (correctly) follow the guidance given by the actually-retained COD Board counsel.  Perhaps Perkoski was concerned that he was out on a limb with his suggestion that the Vice-Chair is allowed to serve in a chairman’s absence only when the Chairman hasn’t resigned.

So Perkoski tried to invoke authority that he knew Collins should respect—the ICCB.  And Perkoski apparently thought it would be a friendly forum to him, given that Trustee McGuire has previously bragged about how the ICCB Executive Director, Karen Hunter Anderson, is her longtime friend.  So he said this:

“While there may not be sufficient time to acquire an advisory opinion for the Board to move forward with necessary business, we recommend that such an advisory opinion be requested in the event that there is a challenge to any of the Board’s actions moving forward relative to the resignation of former Chair Hamilton.”

Unfortunately for him, Mazzochi was already ahead of him.  Before the Board’s scheduled January meeting, she asked the ICCB to offer their opinions on this specific issue:

Well, so there you have it.  Did they end the boycott and their demands to preclude the Vice-Chair from serving as Chair?  Nope.  Collins continued to communicate with the ICCB, based on the email sent to Robbins Schwartz, and appeared to try to have them walk their official statement back over the phone.  We can only guess whether Perkoski’s subsequent e-mails quoted them accurately.  Given his slapdash work above, we question that.

Like many things in Illinois, much of it is all about money and power.  Reviewing all the chaos created by McGuire in her attempts to manipulate control at COD we can only wonder what the real reason is behind their efforts to be in charge.  Why does McGuire and all the rest complain about the legal bills and getting rid of COD’s more ethical Board counsel, Tim Elliott, and insisting on going back to the lawyers that helped get COD into the mess it’s in?

We believe the whole truth behind their efforts will be exposed.

In the future, may we suggest the legislature define “absence” so that all these highly educated attorneys, administrators, and certain board members, will know what it means?  It appears their entire focus was on the reason behind the absence instead of simply accepting the fact the Chair was absent.  The plain language of the statute must be adhered to and if the legislature wanted the reason for the absence to be a factor they would have stated so in the statute.

Who wold have ever thought the word “absence” could lead to such an organized attempt to manipulate control of a Community College Board? 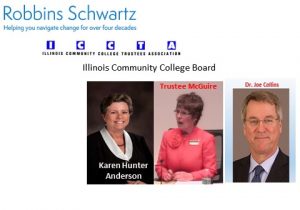 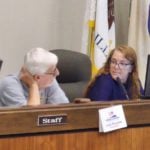