We have been following the events as they have unfolded at the Orland Park Public Library for well over a year now, and this latest case of excessive redactions is over the top.

This all started when it was discovered that child pornography had been accessed on the OPPL computers, and then the staff covered up the incident, but not good enough. Megan Fox found out and requested information from the library only to be stone-walled and otherwise treated as a common criminal.

Of course, nobody cared until she filed a FOIA request for records the library wanted to keep secret.

The Library even decided to develop a tactic of filing false police reports with the Orland Park Police Department, reporting such things as a 2 or 3 year old video Mrs. Fox made that had been on youtube the entire time. That reported claimed the library staff were somehow afraid of the video's song lyrics and were afraid of Fox. There were at least 10 false police reports made by library employees against FOX in order for them to create a record to somehow convince people they were the victims.

Other incidences at this library include the board and its attorney refusing to allow people to speak during public comment, holding illegal secret meetings on holidays, lying to the press and getting caught in that lie during a live radio interview, calling people vulgar names and even admitting to spewing gay slurs.

Now comes the redactions to this FOIA request. Fox sued the library and won a $55,000 settlement under the Freedom of Information Act for their willful violations. Now, the library appears to be violating the terms of the settlement by redacting every single thing on emails that were requested under FOIA.

Below is a picture of one of the redacted emails - every single word is redacted. Do they really think FOIA allows this type of behavior?

Now they will wonder why we started digging into their records again...because of their own behavior. 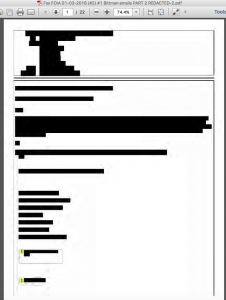