College of DuPage (ECWd) –
Three disgruntled Trustees of the College of DuPage decided it would be a good idea to act like little babies and boycott the regular meeting of the Board of Trustees for personal and political gain.
Diane McGuire thinks Hell will freeze over and she will be elected as the Chairman. This stunt of placing herself ahead of students, parents, staff, fellow trustees, and the public who suffered thru freezing temperatures to attend the meeting, solidifies the need for her to resign while the college is still in operation.
The Public Community Colleges Act gives clear guidance to situations where the Chairman is absent. The vice-chair, Trustee Mazzocci, act in the Chairman’s absence.

(110 ILCS 805/3-10) (from Ch. 122, par. 103-10)
Sec. 3-10. The chairman shall preside at all meetings and shall perform such duties as are imposed upon him by law or by action of the board. The vice-chairman shall serve in the chairman's absence. If the chairman and vice-chairman are absent from any meeting or refuse to perform their duties, a chairman pro tempore shall be appointed by the board from among their number.

Section 3-10 is the enabling Section for the Chairman. It give authority for the Chairman to preside at all meetings AND gives the chairman the authority to act on behalf of the Board or in accordance with law. When the chairman is absent, the vice-chair serves in chairman’s place – and not just at meetings.
It says nothing about holding a new organizational meeting to vote for a new chairman, and in the absence of clear statutory authority (Dillon’s Rule), a new organizational meeting cannot occur.
Erin Birt, Diane McGuire, and Joseph Wozniak decided to place political and personal ambition above the voters, residents, staff, and most important, the students and their parents.
What a shameful display this was.
The football team was presented a trophy, other awards were given, and a scholarship was presented.
Chairman Mazzocci apologized on behalf of the College of DuPage for the childish behavior of Birt, McGuire, and Wozniak, unbecoming of an adult, and of elected Trustees.
Shameful.
Oh, on a side-note, you get to vote for Birt and McGuire’s replacements in 15 short fun-filled months. We will certainly revisit these and other events to refresh your memories. 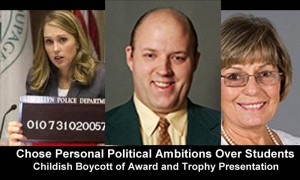