Rep. Reggie Phillips announces he is running for a second term –

Charleston, IL – Contrary to what was reported in IllinoisReview, Rep. Reggie Phillips is not “actively considering leaving the state,” according to Phillips.

“I went to Springfield because I was tired of seeing bad policies drive jobs and opportunities away from our state,” Phillips said. “I looked at my grandchildren and I wondered what kind of future will they have? The decision to run was based on my desire to turn our state around. I think it is important to have representation in Springfield that is not beholden to campaign contributors or party leaders. I am an independent voice and I serve the people of the 110th District and I would be honored to continuing serving in Springfield for another term.”

Rep. Phillips is working with local farmers in opposition to the Green Belt Express Clean Line. He also sponsored a measure (House Resolution 173) to support the nation of Israel. Additionally, he is working with several of his colleagues to pass a measure (House Resolution 671) which calls for an investigation of Planned Parenthood in light of the recent videos exposing some horrific practices involving the sale of human body parts.

One of Rep. Phillips’ top priorities is to change the economic climate in Illinois and enact meaningful business reforms. Illinois ranked dead last in the Midwest per capita for new payroll jobs added to the economy in 2014 while Iowa ranked 14th and Wisconsin 20th, according to data from the Bureau of Labor Statistics.

“One of things I find so frustrating is that there are a few simple changes we can make to really get our economy going but we continue to ignore these simple reforms,” Phillips said. “Enacting real workers’ compensation reform, reducing excessive business regulations, and unleashing the full potential of Illinois’ natural resources would put us back on a course to economic growth and prosperity. The current policies are not working. Illinois can be a leader in good paying jobs but we have to improve the business climate or we will continue to see jobs disappear.”

Rep. Reggie Phillips grew up in Arthur, Illinois. He and his wife Martha have four adult children and 10 grandchildren. In 1986, Reggie and Martha started a residential and commercial building business in Charleston, Illinois which now employs approximately 400 people. He was elected State Representative in the 110th District in 2014. The 110th District encompasses parts or all of Coles, Crawford, Lawrence, Cumberland, and Edgar Counties. 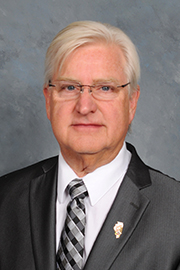