Vermilion Co., IL. (ECWd) –
The Vermilion County Board is set to take action to limit public comment time from five minutes per person, to three minutes per person. this will come to a vote at their August 11, 2015 County Board Meeting.
After taking extensive heat for more than a year, Chairman Maron is apparently deciding that the public is the problem, not the board. He must be tired of listening to those pesky voters and others for 30 whole minutes each meeting.
It must be that they have “more important” business to deal with other than listening to the people they swore to serve.
I’m sure we’ll hear about how this will “streamline” public comment and “provide more opportunity” for people to address the board and that this is simply a “cosmetic change” – nevermind that they could simply increase the public comment time to 45 minutes…now that would enhance the public’s right to speak. Unlike this new policy change.
There you go Vermilion County, remember that when you are asked for your vote in the upcoming elections. Ask yourself this question: “Did my elected representative listen to me and did they offer appropriate time during meetings to listen to others?” 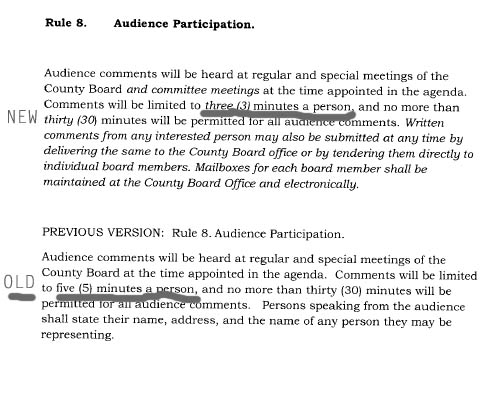