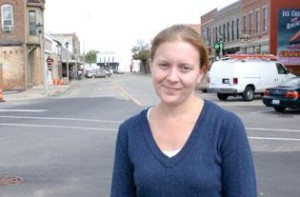 Another public employee that thinks they do not have to answer questions - and this one has the job of answering questions...

Edgar County had a county board member try this stunt last year - and it failed miserably... (read it here).

On Friday Nora Dukowitz, the Communications Director for the city of Bloomington, IL had a local talk radio reporter Josh “Fistbump” Schmidgall served with a Restraining Order and is attempting to keep him and his employer The Cities 92.9 FM from asking questions of Ms. Dukowitz and the city.

Schimdgall and The Cities 92.9 have been attempting to get Ms. Dukowitz and the city of Bloomington to explain why a city employee was given a raise.

Those repeated request have been met with silence from City Hall and Ms. Dukowitz.

On Monday May 18th Schmidgall sent and email to Dukowitz again asking for information on or an explanation for the raise.  When Dukowitz didn’t respond to that email Schmidgall went to Dukowitz’s home and left his business card on the door when no one answered.

Ms. Dukowitz found that to be so harassing and intimidating that she filed for the restraining order and is seeking to have Mr. Schmidgall barred from both City Hall and her residents.

And to top it all off Ms. Dukowitz is also asking for a court to revoke Schmidgall’s Illinois Firearms Owner Identification Card, which is required in Illinois to even legally touch a firearm, and to have his skeet shooting shotgun confiscated.

The Cities 92.9 along with Tea Party blogger Diane Benjamin, who alerted me to this extremely troubling situation, are the only press in Bloomington that --- continue reading here...