Mike Heltsley can’t get anything right – re: resignations –

Another one of County Board member Heltsley’s comments came back to bite him – as they all do. It was no surprise to us, and probably no surprise to the majority of the County.

This one is about his repeated comments about the “tremendous turnover” of employees from the Sheriff’s Department since Ed Motley was elected in 2010 and spends half of his writing space devoted to that subject. He stated all this and then “wonders why” there have been so many, insinuating it was Motley’s fault or the fault of the Watchdogs that they resigned their jobs.  Did he forget he is a county board member and can look at resignations any time he pleases?

We will start from the top on this one and fully explain the personnel turnover non-problem.

1.  This first resignation placed the blame squarely on…..wait for it…. yes! – The County Board!

So Heltsley wonders why people quit, when all he has to do is look in the mirror! There you go Mike, you were the cause of a resignation.

2.  Resigned to take a job at a different police agency in Illinois. Closing his resignation by stating “I would like to close by saying that I appreciate what you have done and are doing to make the Edgar County Sheriff’s Office the best department it can be. I believe that you are working to bring a high level of respect and honor to the department and I pray that you will never waiver from that mission.”

3.  Resignation to pursue her life in another direction, stating that “It has been an honor to work for a Sheriff who has restored dignity, trust, and integrity to the office.”

4.  Resigned to move to North Dakota and take a job offered to him there, stating “I appreciate the opportunity you provided and wish you and your office the best.”

5.  Resignation blaming a female coworker for creating a hostile work environment and saying the radios accentuated her breasts to the inmates. This is one of the former jailers that are under investigation by the Illinois State’s Attorney Appellate Prosecutor’s Office.

6.  Resigned to take a job with a different police agency. Stating “I appreciate the opportunity that I’ve been given here and I wish you the best of luck in the future.”

8.  Resignation with no reason noted.

9.  Resigned to go work for the Paris Police Department stating he will miss the department, he was glad he had the support and opportunity to work there, and wishing the Sheriff and the Department the best in the future.

11.  Resignation, no reason noted. Said he appreciated the opportunities he was given at the Sheriff’s Department and wished success in the future.

12.  Resigned claiming stress and health reasons among others. This is one of the former jailers that are under investigation by the Illinois State’s Attorney Appellate Prosecutor’s Office.

14.  Resignation, claiming harassment and other items to numerous to mention.

15.  Resigned from part time, stating that he “appreciated the opportunity that the sheriff of Edgar County and the Sheriff’s Dept itself has given me to work with such a professional team.”

16.  Resigned from a part time position to take a full time job with the Westville Police Department, stating “Thank you for the opportunity…”

17.  Announcement of retirement after 30 years at the Department.

18.  Announcement of retirement stating that she was “pleased to say I have enjoyed working for you, and the citizens of Edgar County.”

20.  Resignation after 27 years, saying he thanked you [Motley] and all the Sheriff’s he worked under…  (I think this might have been a retirement also)

22.  Another retirement after 25 years. He stated he would help with anything in the future if asked.

Copies of the resignations are below – read for yourself what an embarrassment Mike Heltsley has turned out to be: 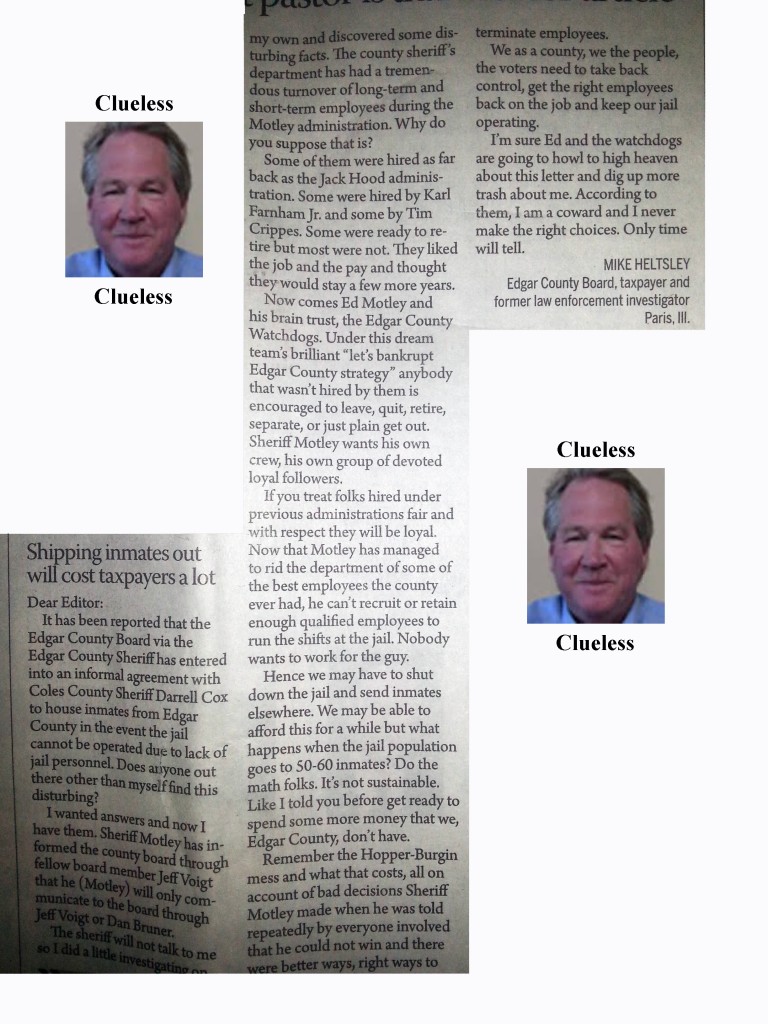