.
It appears that the Orland Park Public Library employees are extracting payback for getting slammed and embarrassed at their meeting a couple days ago. During that meeting, an attorney thoroughly chastised the board for their past actions, an attorney intern continued, and the Edgar County Watchdogs who also spoke to the board - even read what Dan Kleinman was forbidden by the OPPL board to read.
What happened today, is over the top. An employee of the OPPL by the name of Joy McFadden that is raking in over $100,000.00 per year, apparently had her husband, or is herself using her husband's Facebook account, incited and encouraged other individuals from a group called "f*ck Alex Jones" to continue their coordinated attacks on Megan Fox, a person that spoke against the library's policy on unfiltered internet access that allows child porn into the library.

Read what Megan had to say about it:

BOOM! Proof that the Orland Park Public Library is involved in the attacks on me today using trolls. You've seen the trolls coming over here at the invitation of the "F*ck Alex Jones" group leader. Well, I happened to notice that in one of the posts over there a man named "CH Ryan" was thanking "F*ck Alex Jones" for attacking me today. Curious, I clicked on his name and it took me to his Facebook page. Do you know who "CH Ryan" is? It's Joy McFadden's husband! Here are the screen grabs to prove it too. Joy McFadden is the Library's "technology guru" and the one who runs the video cameras during the meetings…and here I have proof her husband goes online and encourages people to attack me. Something tells me that Joy is going to have to sit for a deposition about this in the future. She's a public employee and she's having her husband go online and encourage people to attack me. Feels like another civil rights violation to add to the growing pile. And it's so ironic too because Joy is supposed to be the "technology guru", but here she is embarrassing herself by having her husband get so easily caught attacking me.
Here are the screen grabs from the time that Joy McFadden's husband (a video game industry worker named "CH Ryan") attacked me on Facebook on 6/20/14. He was one of the guys egging people on at the page "F*ck Alex Jones" to come to my page and attack me. Joy McFadden is the "technology guru" at the Orland Park Public Library and is a public employee earning about $100,000/year. It's clear that she had her husband go online and encourage people to attack me as an intimidation tactic, as I am currently involved as a witness in civil rights and other matters pending against the Library. I believe that Joy McFadden very well could have been operating under orders from the Library Board when she had her husband attack me in this way…possibly to intimidate me as a witness against the Library Board. Pretty terrible behavior from a public employee if you ask me.
The photos and screenshots of the lively exchange can be found HERE - but be warned, it is not "information" meant for children.

Mr. CH Ryan has blocked most everything in the screenshots from his Facebook page now that he has been outed. His Facebook page says he works for "Midway Games", and their company website from their LinkedIn page goes directly to Warner Bros' Lego Movie Video game. We will do what we can to get the word to them about how their employees are acting - I'd bet they will be very proud of him...there is also some contact information on IGN.com that appears to be dated, but it lists the same website that goes to Warner Bros. A guy by the name of Scot Bayless is listed as their VP. A little history on THIS SITE states that Warner Bros did purchase most of the company for $33 million in 2009 after they filed for bankruptcy. The only other Mid-Way Games is a toy store, and I doubt if he works at a toy store as a game designer.

Picture of JOY and CHRIS McFADDEN

UPDATE:  CH Ryan works at Jellyvision (maybe in addition to Midway but Jelly is his primary job)
That husband of hers also says he works for something called "Jellyvision". That's missing from the original article. This is his current job, not Midway Games. He deleted the "Jellyvision" from his "About" page in a hurry. He does not want people to know about "Jellyvision".

The Jellyvision Lab - Chicago, ILThe Jellyvision Lab, Inc. is a creative, focused, and driven company, with a knack for adjectives and a strong vision for interactive communication. Founded by the creator of the YOU DON’T KNOW JACK game series, Jellyvision has expanded beyond the realm of interactive entertainment and now creates virtual teachers, insurance reps, salespeople, advisors…you name it, we’ve probably done it. We make complex and difficult topics easily understandable (and way more huggable) through a variety of user-driven, interactive products. Whether it's one of our signature interactive conversations, old-school formats like videos or eBooks, or something completely new, the end result is clear, funny, and relevant communication that helps people understand things and make better decisions. THAT’S LOVELY… BUT WHAT’S THE JOB? The primary responsibility of this job is architecting, building, and maintaining internally used toolkits. Secondary responsibility is assisting with basic Linux systems administration. This position requires understanding of a wide variety of applications, API’s, middleware, and security. THIS IS NOT A WEB DESIGNER JOB. You will also participate in platform architecture decisions and be a key player on the hosting operations team. Please read on for more specifics… RESPONSIBILITIES Build and maintain web-based tools to manage creation and configuration of cloud-based systems and technologiesDatabase management (MySQL and SimpleDB)Basic data modelingIdentify tasks for automation and build tools around themNetwork monitoring system configuration and managementArchitect and build new provisioning toolsNew technology research (e.g., HTML 5, NoSQL)SKILLS 3-5 years LAMP development experience along with basic Linux administration (we have sysadmins, but you need to be comfortable working on Linux servers at the command line)Expert level operational understanding of a majority of the following technologies:PHPAJAX/Javascript/JSONCSS 2/3Flash and ActionScript 3MySQL queries and data modelingArchitecture. You should be able to:Rapidly design, deploy and maintain multi-tiered webapps based on broad definitions. Define security policies around data handlingAbility to self-manage and multitask in a fast-paced environment. Things change often at Jellyvision, and it's imperative that you're able to juggle multiple tasks, track changes, AND maintain attention to detail.NICE TO HAVES… Ruby on Rails experienceFlex SDK experienceUnderstanding of Amazon Web Services, specifically: EC2, EBS, S3, SQS, SimpleDB, and RDSUnderstanding of network monitoring/management systemsKnowledge of other programming languages (e.g., Java, Python, Ruby)YOU SHOULD ALSO… Be a life-long learnerBe disciplined…in your engineeringBe imaginative…in your engineeringUnderstand urgency, and when to apply itWrite clear, easy to understand documentationBe able to read through and understand code for troubleshooting purposesHave a willingness to calmly own and resolve unexpected incidents that occur in a hosting environmentBe a great communicator: written, verbal, Skype, video conferencing, smoke signals, sideways glancesANYTHING ELSE? Yes. We only hire nice, bright, funny people who are willing to work hard. Jellyvision is a group effort and you must be capable of working collaboratively with creative, technical, and occasionally sales types. Everyone at Jellyvision shares a commitment to excellence and a desire to work in a comfortable, friendly atmosphere. ARE THERE ANY PERKS? Yes, we love perks. Competitive pay, stock options and benefits. 401(k) with matching. And we pay 100% of the cost of premiums for medical, dental, vision, disability and life insurance for our employees (as long as you don’t use tobacco – if you do, you’re going to have to kick in some for the medical premiums). We also cover a really nice chunk of the cost of premiums for spouse/partner/dependent medical, dental and vision insurance. Casual dress and a flexible schedule. Come in a sweatshirt, jeans, whatever, like everyone else here. Creative work environment. We are lucky to work in a place that is full of intelligent, talented and innovative folks. Although most hours the place is deathly quiet (we're a focused bunch), this is punctuated with hilarious outbursts and general merriment, which makes a nice way to spend the day. Free food. Every week, we stock our kitchen with free healthy snack foods, and we have a “hot lunch” catered once a week to give people a reason to hang out and eat together. Easy transportation. We’re really close to the "L" and the Halsted (#8) bus (right by the Apple Store and Mega Whole Foods too), and we have a transit FSA that allows you to dedicate pre-tax dollars to public transportation expenses. And a number of our employees like to bike to work, so we also have showers and lockers in the office. Did we mention our yoga class? We bring a pro instructor right to the office. Fully subsidized by Jellyvision and fully optional, btw. Oh! And we have a massage chair. Not just any massage chair, my friend. It’s the HumanTouch HT 5320 WholeBody™ Massage Chair. Feeling a little stiff? Sit down. Relax. Feel better? Good. Okay, back to work. INTERESTED? Great, we look forward to reading your application - make sure it includes: A cover letter that highlights three reasons you think you’d be great for the gig, focusing on how your past work experience has prepared you for this kind of position – or why you think you can rock the job even though you don’t have past work experience that’s perfectly aligned. Writing is key to all that we do, and we weigh cover letters heavily. Your resume . You will receive an auto-reply confirming that we've received your application. If you decide to apply, please know that every complete application will be carefully reviewed. Seriously! We know it is a time commitment to prepare an application. And we respect that effort by thoughtfully reviewing every complete application and responding one way or the other. But that kind of thoughtful review means that it sometimes takes us awhile to get back to applicants, so please NO PHONE CALLS. The time we spend responding to phone calls and emails inquiring about where we are in the process is time that we could be spending actually moving the process along – so please be patient with us! Thanks for your interest in Jellyvision! The Jellyvision Lab
Jellyvision LinkedIn: http://www.linkedin.com/company/22884?trk=ppro_cprof
Jellyvision Webpage: http://www.jellyvision.com/
"CH Ryan" has a real name: CHRIS McFADDEN, http://www.jellyvision.com/team/chris-mcfadden/ 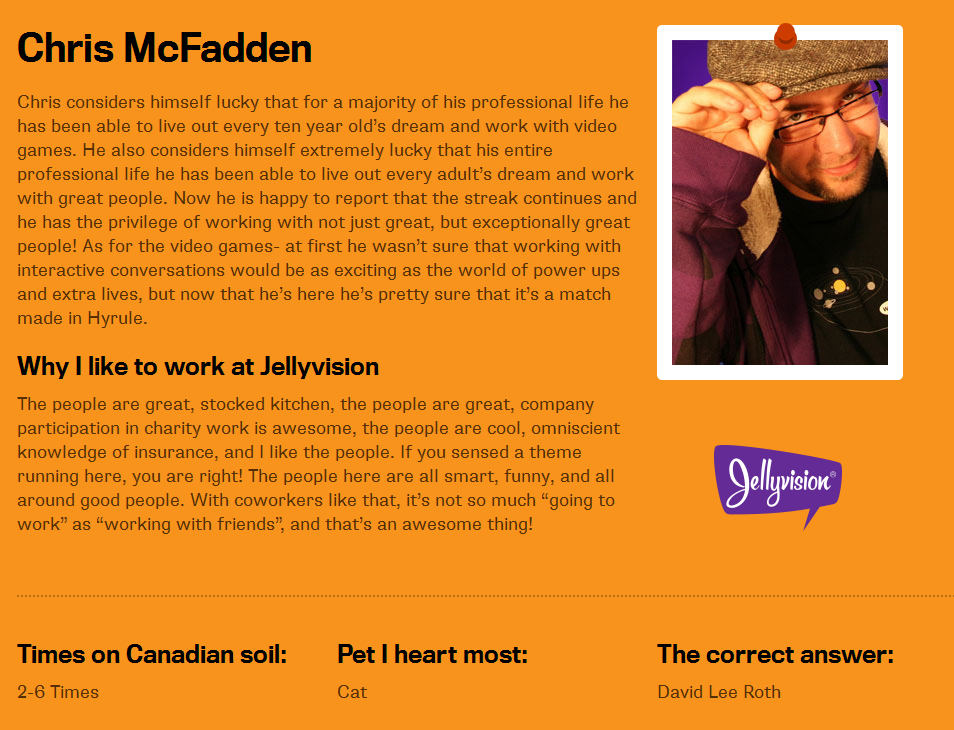