This timeline shows the Orland Park Public Library’s false police reports and their embracing (by their own failure to act) of pornography and sexual deviancy within the library. Below are the details on the times that the police were called on Kevin DuJan and Megan Fox…and also information from the police investigation on all the times that the Library should have called the police immediately, but chose not to when sex crimes were happening in the Library.
OPPL Called the Police 8 Times for Intimidation against Pregnant Mom and another
See the below graphic for EIGHT times they called the police on Kevin DuJan and Megan Fox from October 2013 through May 2014. This was simply an intimidation attempt in order to silence those speaking out about the library allowing unfiltered internet access, including access to child pornography. They tried to use the police for their own benefit, and as retribution against the public.
Click picture to enlarge – read it, it’s amazing how low the OPPL will go: 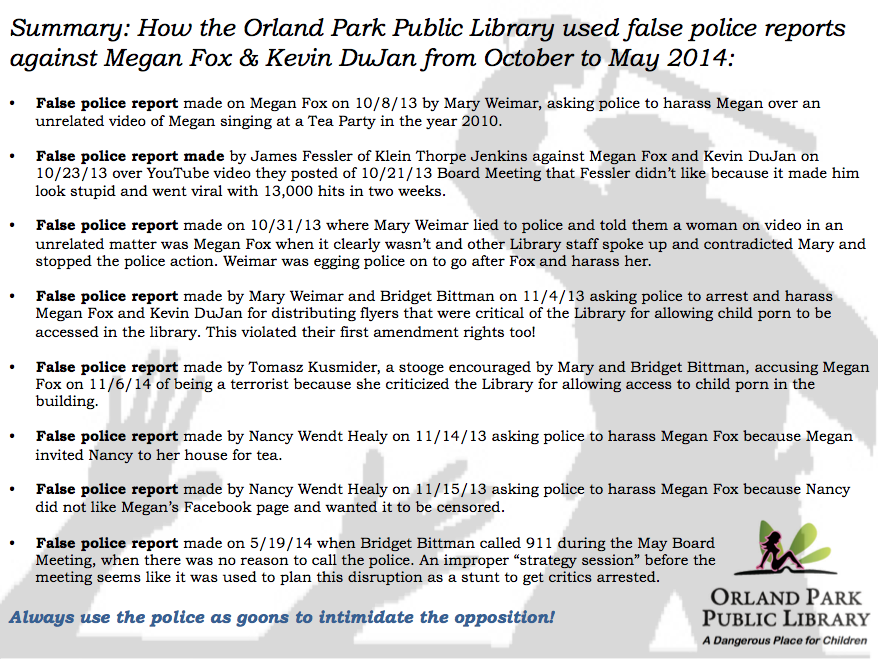 The OPPL, with the intent to cause Kevin and Megan to either quit talking about a certain policy or to quit coming to open public meetings, took action as public officials to use the police department to intimidate Kevin and Megan into compliance with the OPPL’s wishes, and against the civil rights of Kevin and Megan.

Major informational contributions to this article by Megan Fox.