SPRINGFIELD, IL. (ECWd) -
Sen. Dale Righter (R), gave a quick press conference on Gov. Quinn's abuse of the Executive Appointment process. The latest abuse is his appointment of Julie Hamos as the Director of the Illinois Department of Healthcare and Family Services. Instead of subjecting her to questioning from the Senate, Gov. Quinn pulled her appointment, waited a day, and reappointed her to the position.
This starts the appointment confirmation "clock" all over again. It is a questionable maneuver, but Quinn should have allowed her confirmation to move forward. Is it possible her appointment is too controversial to allow questioning considering what has transpired in the past year?
Public Act 97-0582, amending the Illinois Governmental Ethics Act and signed into law by Pat Quinn on August 26, 2011 was supposed to take care of situations like this, but apparently Quinn doesn't see it that way.
Julie Hamos and HFS:
-Defendant in a Freedom Of Information Act civil suit in Edgar County (HERE, HERE and HERE). During almost 2 ½ hours of hearing testimony and arguments, Judge Sullivan declared Illinois State Health and Family Services to be in violation of the Illinois Freedom Of Information Act, ordered them to produce documents requested, and order them to pay Plaintiff’s costs of bringing the suit. Although plaintiff, Kirk Allen, pro se, prevailed in this suit, further information was obtained that caused Mr. Allen to petition for a new hearing.
-Hamos attempts to censor national media (HERE).
-Hamos front and center in the medicaid scandal involving the no-bid, but legal, intergovernmental agreement with Michigan to have CNSI contracted for MMIS services (HERE).
Watch Sen. Dale Righter in the below video:
. 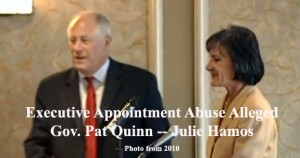